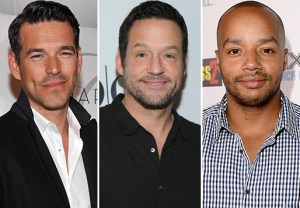 The multi-cam project — which Potter also will executive-produce, alongside Ellen DeGeneres — revolves around Potter’s Bridget, whose dating life is complicated by her busy family and her three ex-husbands.

Cibrian’s Jason, a slick professional gambler who fathered Bridget’s daughter Jessica, is Bridget’s first ex (and is slightly territorial when it comes to his former wife).

He’s followed by Ex #2, Faison’s Kevin, an upbeat environmentalist who happens to have a lot of cash; Kevin is the dad of Bridget’s son, Ty.

Finally, Scovel plays Ex #3, Robert, a stuck-up writer/college professor who went to Harvard (Ground Floor shout-out?) and is insufferable in reminding everyone of that (despite the fact that he now lives with his mom). Robert sired Bridget’s son, Dylan.

If Potter’s project is picked up to series, TVLine has learned, Faison will not continue with a potential fifth season of his current gig: TVLand’s The Exes.