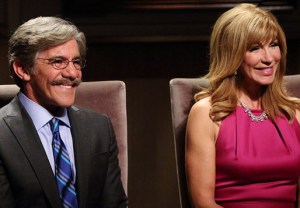 First, the results of last week’s final face-off were revealed, with Rivera’s team netting $146,000 and Leeza Gibbons‘ team earning $234,000. But even with that victory under her belt, Gibbons’ total was still trailing her fellow ’90s media titan’s by more than $250,000.

Fortunately for Gibbons, it wasn’t all about the bank for Trump — not necessarily, at least — when it came time to name a winner. After asking the returning celebs for their picks, he gave each finalist one last chance to plead his and her case (during which time she played surprisingly dirty). Then, it was time to lay down the hammer…

In the end, Leeza Gibbons was named the winner of this season’s Celebrity Apprentice. 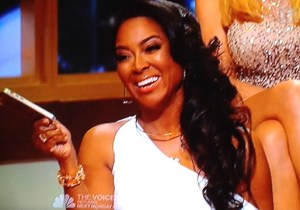 That said, the reveal of this season’s big winner was only part of the joy brought on by tonight’s finale. The two-hour live production was a veritible parade of awkward reunions, and the producers staged it flawlessly. Case in point: All that stood between still-heated rivals Vivica A. Fox and Kenya Moore was Ian Ziering, who (let’s be real) wouldn’t stand a chance should the dueling divas decide to go at it.

Naturally, #PhoneGate was rehashed; Moore insisted she didn’t steal Fox’s cell, to which Fox replied,” When she starts with the hands, you can believe that she’s lying.” The audience seemed to agree, as did Brandi Glanville, who said it was “clear” that if it wasn’t Moore, it was someone in her hair and/or makeup gaggle. Then she dropped the holy grail of reality TV proverbs: “It is what it is.”

Then there were the surprisingly heartfelt moments, like the arrival of Melissa Rivers for a moving tribute to her mother Joan Rivers. Even Joan cried during a clip in own montage; it was that emotional.

Apprentice faithful, do you believe Gibbons deserved to win? Browse finale photos, then drop a comment with your thoughts, and any unresolved issues, below.