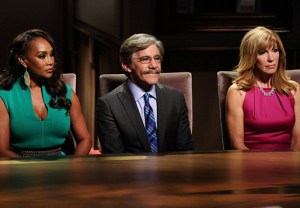 And then there were two…

Just as TVLine foretold last week, Donald Trump kicked off Monday’s Celebrity Apprentice with a surprise firing — but who got the dreaded, penultimate pink slip?

That would be valiant Sharknado survivor Vivica A. Fox, who will not be competing in next week’s live finale; this leaves legendary news folk Geraldo Rivera and Leeza Gibbons as this season’s final two competitors.

“I’m definitely a great player,” Fox said through tears before Trump finally laid down the hammer. “I’ve done good and I’ve won some tasks for my charity.” She also had wonderful things to say about both Rivera and Gibbons; a true class act ’til the very end.

Frankly, I had a feeling Fox would be fired this week, though she absolutely deserved her spot in the Final 3. Not only did she show unwavering commitment to every task this season, but even in the face of relentless antagonists — here’s lookin’ at you, Kenya Moore, ya freakin’ nightmare person — Fox managed to keep her cool.

Do you think Fox deserved the boot? And which remaining celebrity, Gibbons or Rivera, do you think will win it all? Drop a comment with your thoughts below.