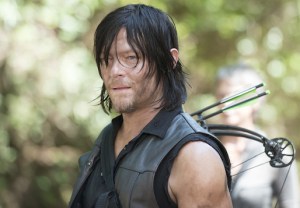 If you were to turn to the dictionary entry for “dead tired,” the illustration accompanying the definition would probably look a lot like the survivors on The Walking Dead did this week. They were exhausted, hungry, dehydrated and, worst of all, demoralized. But then, something happened that promised to change everything. Wanna know what that something was? Keep reading…

OUT OF GAS | As the hour began, times were so tough for our remaining regulars that Daryl was eating a worm for sustenance, Maggie was almost too pooped and depressed to stick a knife in a walker’s head, and Sasha’s search for water turned up only a trail of dead frogs. “How much longer we got?” Maggie asked. “Sixty miles,” Sasha replied. “I wasn’t talking about that,” Maggie clarified. Yeah, things were that bad. And almost immediately, they got worse: The gang was out of gas (and not just metaphorically anymore). “So we walk,” said Rick, somehow managing to remain optimistic even after the losses they’d so recently suffered.

OUT OF SORTS | Hard as the going was, there were some very sweet moments along the way. On a fruitless hunting expedition, Carol gave Daryl Beth’s knife and repeated the words of comfort he’d once said to her: “You’re not dead.” She even pushed his greasy hair out of his face, kissed his forehead and encouraged him to let himself grieve for their fallen friends. Carl gave Maggie a broken music box. (It’s the thought that counts.) Gabriel reached out to Maggie, offering to listen if she ever wanted to talk. But not only did she not want to talk, she definitely didn’t want to talk to the preacherman who’d left his own congregation to die. (Hey, he gave it a shot.) And Michonne tried to help Sasha get her emotions in check by comparing the human time bomb’s reaction to losing Tyreese to Tyreese’s reaction to losing Karen. “We are not the same,” Sasha snapped. “But it’s still the same,” Michonne noted. (Hey, she gave it a shot.)

OUT OF OPTIONS | Shortly thereafter, as the group was executing a fool-proof, energy-conserving plan to get rid of a bunch of walkers by simply nudging them down a hill — zombie tipping? — Sasha broke ranks and came out swinging, nearly getting Rick bitten in the process. “I truly do not know if things can get worse,” Eugene said later. “They can,” Rosita assured him. And, right on cue, they did: Out of the woods came a pack of dogs gone frightfully feral. Before they could attack, however, Sasha had shot them all. (See also: The Leftovers.) While everyone ate the saddest meal ever, Noah forlornly stared at one of the dogs’ collars and told Sasha that her brother had tried to help him. Still, “I don’t know if I’m gonna make it,” he added. “Then you won’t,” she replied matter-of-factly. “Don’t think. Just eat.” Nearby, an impassive Maggie watched as Gabriel tossed his collar on the campfire.

OUT OF SIGHT | In the comments section, you’re sure (and welcome) to debate which character felt the crummiest this week. But my money’s on Maggie. Yes, Sasha was in a dark, dark place. So dark, in fact, that when she told Abraham that his boozing was gonna make things worse, he was moved to respond that SHE was what was gonna make things worse. And it didn’t have to be that way. “You’re among friends,” he noted. “We’re not friends,” she replied. Okay, then. Daryl wasn’t doing so hot, either. At one point, he even stole away from the group to smoke, deliberately burned his hand and then, at last, had himself a good cry. But Maggie… man. First, she couldn’t bring herself to knife the old lady walker that she found in a car trunk; then, she became so desperate to get the trunk reopened so that she could knife the zombie, she was ready to shoot the jammed lock; and finally, she confessed to Glenn, “I don’t know if I wanna fight [to survive] anymore.” Thankfully, he convinced her that she did want to. At least he was able to get her to take a sip of water.

OUT OF NOWHERE | Just when it all seemed utterly hopeless, a Costco-sized delivery of bottled water appeared in the road along with a note saying that it was “from a friend.” Since there was great concern that the water had been poisoned, Eugene (almost redeeming himself in my book) risked his life to take a swig for “quality control”… only to have Abraham knock the bottle out of his hand. (Once a protector, always a protector?) At that point, the skies opened up, and at last, it rained. “I’m sorry, my Lord,” Gabriel cried as everyone else drank as much as they could, drop by drop. As the storm worsened, the group took shelter in the barn outside of which Daryl had had his crying jag earlier. Finding first a Bible and then another old lady walker — big week for old lady walkers, apparently — Maggie knifed the zombie. The woman had a gun, Carol noted. She could have killed herself. But “some people can’t give up,” she added. “Like us.” That evening, Rick told a campfire story about how his grandfather had survived combat by waking up every day as if he were already a goner. “Rest in peace,” Grandpa would say to himself. “Now get up and go to war.” And that was how they were going to make it, too. “We tell ourselves that we are the walking dead,” he suggested. And, as cool a monologue as it was, Daryl gave it a thumbs-down. “We ain’t them,” he insisted. (There’s one in every crowd… )

OUT OF TEARS | Moments later, Daryl discovered that walkers had surrounded the barn. One by one, the others joined in, helping him keep the doors shut. The morning after, Maggie discovered Daryl still standing guard and encouraged him to get some shuteye. In turn, he gave her back her music box — he’d fixed it. Since Daryl wasn’t keen on resting, Maggie tiptoed over to Sasha, woke her up and led her through a field of walkers impaled by fallen trees to watch the sun rise. Sasha admitted that she felt like Noah — like she might not make it. But Maggie, back to her usual self, reassured her that they would both make it. “That’s the hard part.” She then wound up the music box to hear it for the first time, and… hilariously, it broke again!

Just then, a handsome stranger appeared, a handsome stranger who looked like he showered regularly and had access to a Laundromat. “My name is Aaron,” he said as the women pointed their guns at him. “I know — stranger danger. But I’m a friend.” (That’s what they all say, isn’t it?) Next, he asked to be taken to their leader — by name. Wait, what? How did he know they had a leader, much less that his name was Rick? Aaron wasn’t giving any answers… yet. But he did say, “I have good news.” And just like that, the music box ominously began to play.

OK, your turn. What did you think of “Them”? First impression of Aaron? Hit the comments!