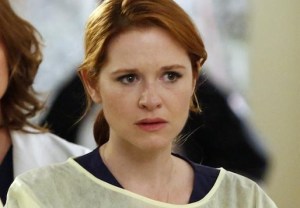 As it is wont to do from time to time, Grey’s Anatomy is mining a parent’s worst nightmare, as April and Jackson await word on how severe a case of osteogenesis imperfecta their unborn child is facing. Should Dr. Herman deliver a Type 2 diagnosis in tonight’s episode (ABC, 8/7c), it means their son has a typically fatal form of the brittle bone disease.

As April braces for the reveal, “She is expecting the worst, but definitely hoping that she’s wrong,” Sarah Drew tells TVLine. “[She and Jackson] haven’t decided what they would do if the baby is Type 2, so she is hoping beyond hope that she is wrong about what she feels like is coming.”

The distinct wrinkle coloring this storyline is April’s rigorous religious beliefs, which already have incited a battle of wills between Jackson (played by Jesse Williams) and her mother, and this week will be questioned by April herself as she braces for the news, be it bad or worse. “She has followed His calling, she has saved lives for a living, so she can’t imagine why a good God would [put someone through such an ordeal],” says the actress. “It’s one of those heartbreaking, very real moments that any person of faith goes through.”

April, of course, is not in this alone in this crisis, having husband Jackson at her side as they get a clearer picture of their future as first-time parents. “Jackson is 100-percent all about caring for his wife in the best possible way….. All he wants to do is love her and love his baby the best way he can,” Drew observes. “But if the news is bad, he doesn’t know what he would do. Nobody can, which is why [at one point] he goes to the chapel to pray to a God he doesn’t believe in.”

Interestingly, Drew herself was the source of this powerful storyline idea, having heard a real-life tale of osteogenesis imperfecta and shared it with Grey’s creator Shonda Rhimes. Coming out of a Season 10 episode in which April engaged in a pro-life/pro-choice discussion, she saw an opportunity to illustrate the opposing beliefs in a profound way.

“My mom, who is pro-life, had offered this story of her friend that went through this [OI] situation, as an example of a not-so-black-and-white way of looking at this debate,” says the actress, who in December gave birth to her second child, Hannah, three weeks early. “So when I discovered my character was pregnant, I said [to Shonda], ‘Oh, you’re totally going to use that story, right…?’ And she said, ‘I wasnt planning on it, but that’s amazing. Yes, I will use that story.’ It was sort of an accidental pitch!”