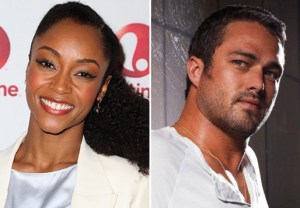 Of course Severide’s next love interest will look like she just stepped off the cover of a magazine.

Chicago Fire has tapped former America’s Next Top Model contestant Yaya DaCosta — who recently starred as Whitney Houston in Lifetime’s biopic — to play Maggie Seaver, an old acquaintance of the firefighter and a nurse who’ll be a central character at potential spinoff Chicago Med, our sister site Deadline reports.

“Severide is going to reconnect with a girl he went to high school with,” executive producer Matt Olmstead tells TVLine. “It’s an interesting connection of someone that he wasn’t romantic with. She was the alt chick who sat next to him in homeroom, but they had a connection.”

Despite not running in the same social circle, it’s revealed that “there’s a debt that he owes her.”

The two “reassume their old dynamic, and there’s a real friendship there,” the EP continues. “They both went through a tough time together. So it’s gratifying for him to see her, meet her again and reconnect.”

DaCosta — whose TV credits include guest spots on Ugly Betty, Unforgettable and House — will appear in Episode 19 of Chicago Fire, which will serve as a planted pilot for the franchise’s medical offshoot.

Stoked about this bit of casting — and possible love connection? Sound off in the comments!