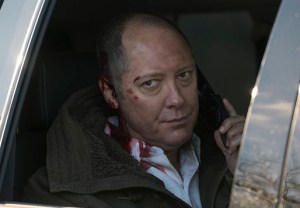 Memory
Turn your face to the moonlight
Let your memory lead you
Open up, enter in

Who knew a lyric from “Cats” could apply so well to The Blacklist?

Indeed, the conclusion of the show’s two-part midseason premiere found Liz Keen trying to retrieve something she assumed was lost forever: her memories. Unfortunately for Ms. Keen, the images of her childhood that she was able to conjure again were simultaneously disheartening and extremely misleading. But I’ll get back to that.

Picking up where Sunday’s episode left off, Thursday’s hour begins with missiles striking The Factory, allowing thief Luther Braxton (Sons of Anarchy‘s Ron Perlman) to capture Liz and take her to another middle-of-nowhere facility. The ultimate goal: force Liz — who is thought to know the whereabouts of The Fulcrum — to remember where that all-important file is.

Braxton calls upon Dr. Selma Orchard (a woman who once helped him eliminate painful memories) to bring Liz’s repressed ones to the surface. Dr. Orchard obliges for the sake of her young son —who is being held hostage until the doc’s work with Liz is done — and with the help of sedatives and lucid dreaming, Liz is transported back to that fateful day when a fire claimed her home and her identity.

We’re only able to glimpse snapshots of her memories: a young Liz hiding in a closet as her parents argue about The Fulcrum. Her doll that was singed in the fire, the flames quickly engulfing her house. But Liz is able to make out a few strangers exiting the building, and she spies Red in a corner of the burning room, as well.

When Liz awakens, she’s (rightfully) furious with Red for pretending to care about her all this time, when he’s really been after The Fulcrum. Though Red insists that the situation isn’t as black-and-white as Liz is interpreting it, she fires back: “That’s why you came into my life, then. And that’s why you’re here now. Not because of me, who I am to you or whatever connection we might have. It’s because of some object. Some thing. This charade of you pretending to care about me? It was a waste of your time. Because I don’t know where it is.”

RELATED SNL Boss Lorne Michaels on the Big Names (Carell!) He Turned Away

So, Liz’s relationship with Red is as tenuous as ever by the time the episode ends. And as for Braxton — well, he’s been hanged after Red tracks him down.

Before the hour is over, though, Dr. Orchard confesses to Liz that, though this may have happened when she was too young to recall, it’s possible someone has already tried to block Liz’s accurate memory of that childhood fire. “The only people that can tell you what really happened are the people who want you to forget,” Dr. Orchard admits.

Soooo, is it possible that Red isn’t just after The Fulcrum? This is the major question we’re left with by episode’s end. Another important query: What is the object that Liz finds hidden inside her stuffed bunny — and what importance does it hold to her?

Oh, and even though Harold Cooper’s health took a backseat to Liz’s memories in this episode, what are we to make of the diagnosis he and his wife received at the end of the hour?

Got other questions about Thursday’s episode? Or perhaps some theories? Grade the “Luther Braxton” conclusion in our poll below, then hit the comments to back up your choice!