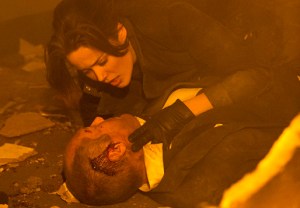 If you tuned into the final minutes of Super Bowl XLIX, you might think pop culture’s biggest rivalry is currently that between the Patriots and the Seahawks.

But The Blacklist‘s midseason premiere introduced another pair of foes, one much more sinister than anything on the football field.

I’m speaking, of course, about the rivalry between Ray Reddington and Luther Braxton (played by Sons of Anarchy‘s Ron Perlman), which came to light in Part 1 of the NBC drama’s two-part episode. (The second half airs Feb. 5, when the show moves to its new Thursdays-at-9 time slot.)

Sunday’s hour was filled with exposition, teeing up quite a few loose ends that need tying up later this week. Let’s highlight the big takeaways from “Luther Braxton”:

WHO IS LUTHER BRAXTON? AND WHAT’S HIS BEEF WITH RED?
A high-ranking No. 21 on The Blacklist, Braxton is a thief who “plans his heists to occur in the midst of chaos.” He’s currently being kept in solitary confinement at an off-off-off-site facility, dubbed The Factory — well, not for long, after he MacGyvers himself out of the cell and kills all the prison guards. And though we don’t learn specifics about his beef with Red, we do learn that Braxton was responsible for a number of casualties when he faced off against the fugitive in Belgrade, years ago.

WHAT DOES BRAXTON WANT?
Braxton’s after The Fulcrum AKA a very important blackmail file that will prove the existence of a clandestine organization whose exposure could mean very bad things for national security. Red, Liz and the rest of the task force, of course, are trying to stop Braxton’s finding The Fulcrum — but that doesn’t go so well, after Agent Ressler and Samar Navabi are kidnapped by Braxton’s men.

And if The Fulcrum weren’t enough, Braxton also wants a master code that will help him break into the clandestine organization’s network. Harold Cooper isn’t about to hand over the code… until he realizes Navabi will be killed if he doesn’t, which forces him to spill the beans.

WHAT DANGER IS RED IN?
Um… kind of a lot. See, the cabal has long been under the impression that Red possessed The Fulcrum. Now that they know he doesn’t have it, Red is no longer a threat — but he does need to be eliminated. Despite Cooper’s protests, the organization launches a number of missiles that target The Factory and, more importantly, Red.

HOW IS LIZ TIED TO ALL OF THIS?
It wouldn’t be an episode of The Blacklist if Liz weren’t majorly involved — unbeknownst to her, of course — in Red’s latest rivalry. As Red and Liz prepare to mess up Braxton’s plan via The Factory’s boiler room, Red admits to Liz, “If I don’t get Braxton, what he’ll discover is that he can’t get The Fulcrum without you.” We echo Liz’s sentiment when she asks, “What do you mean, ‘without me’?”

ARE LIZ AND BRAXTON LINKED?
Somehow, yes. When Liz and Red finally come face-to-face with their adversary, Braxton hints at some serious knowledge about Liz’s past. He knows about “the house, the fire and the girl,” then asks Red, “She was there that night, wasn’t she? She’s the one?” Just as Liz gets instructed to shoot Braxton, those aforementioned missiles very inconveniently land at The Factory’s front door.

OK, your turn. What did you think of The Blacklist‘s midseason premiere? Grade the episode via our poll below, then hit the comments to back up your choice!