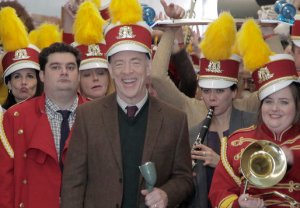 J.K. Simmons may be the least-recognizable name to serve as Saturday Night Live host during the show’s landmark 40th season. But the beloved character actor — who just scored an Oscar nomination for Whiplash — seemed on paper like a great choice for the gig, thanks to his ability to disappear into roles in everything from Oz to The Closer to Growing Up Fisher (to his ads for Farmers Insurance).

Alas, while many of the episode’s sketches had even fewer laughs than slabs of bacon in a vegan restaurant kitchen, Simmons did prove up to the task in the instances where he had access to solid punch lines.

And hey, at least D’Angelo’s brand of laid-back soul delivered a full 10 minutes without any compulsion to hit the fast-forward and/or mute buttons.

Below, my picks for best and worst of the night:

BEST: Teacher Snow Day
The bulk of the Season 40 cast got in on the hilarious, pre-taped fun with a rap about overworked educators enjoying a weather-related break even more than their students. Simmons got to shine as a pants-free principal, but best-in-show honors go to Cecily Strong as a pot-smoking teacher spitting rhymes like, “Zero f—ks given/ This is blizzard livin’!”

BEST: Casablanca Re-write
Kate McKinnon stole the show playing Ingrid Bergman as Ilsa Lund in an “alternate ending” to the 1940s classic. Except, in this version, McKinnon’s character couldn’t wait to get on the plane — at least after Simmons’ first mention of the danger of concentration camps in this wartime scenario. OK, the setup was a slippery one, but McKinnon’s daffy line readings sold it.

BEST (OR WAS IT WORST?): Japanese Messy Boy
Simmons committed completely to this setup about a dad at an elementary-school career day discussing his job as an infantilized, bib-wearing plaything paid handsomely by rich Japanese women to eat sloppy foods — sans napkins. As the description of his work got more absurd, Simmons maintained an amusing cool — as if he were discussing work no more exotic than accounting or real estate or research chemistry. Yeah, I laughed a few times — but then I wondered if there was something wrong with me, so…

WORST: The Jay-Z Story
Former featured player (and current writer) Mike O’Brien got back in front of the camera in this black-and-white pre-taped “documentary” about the life of Jay-Z — only with the white comic taking over the role of the famous rapper. Problem was, O’Brien’s characterization never went beyond the idea of “outwardly pasty” equalling anything other than utterly milquetoast. How lazy — and ultimately unimaginative. All together now, “L to the izz-A, M to the izz-E!”

WORST: Opening Monologue
It mades sense that the show’s writers might try to riff on Simmons’ stern musical taskmaster from Whiplash — with the actor rejecting drummer after drummer for a musical monologue number. Unfortunately, none of the scenarios went beyond the rudimentary “you suck!” and into darker, wackier or more absurdist places. Leslie Jones scored a guffaw when she finally fought back against Simmons’ faux bluster, but by then, the bit had lost its comedic rhythm.

OK, your turn. What did you think of Simmons’ SNL episode? Take the poll below, then sound off in the comments!