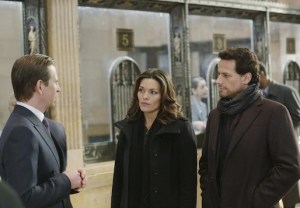 This Tuesday’s Forever (ABC, 10/9c) fits right in with a theme common to many of this year’s Super Bowl commercials: Fathers, their children and the parental desire to keep offspring safe from harm.

Don’t worry: Abe won’t be the subject of a mood-killing Nationwide ad anytime soon. But when Burn Gorman’s murderous Adam returns and has a run-in with Henry’s geriatric son, the normally placid Dr. Morgan is not having it.

The problem with threatening an immortal, though, is that you’ve got to get very inventive in getting him to see your way of thinking, star Ioan Gruffudd says.

“There’s this idea that [Henry] wants to kill him, and then he goes through ‘I can’t kill him, because he’ll just come back,'” Gruffudd says, laughing. “There begins the game, I suppose, that we’ll get throughout the series.”

Throughout the episode, we learn a little about Adam’s backstory — but only a glimpse, remember, because the guy is thousands of years old (and the show’s only an hour long). And why, exactly, is he back?

“We don’t know his intentions,” star Judd Hirsch reminds viewers. “How can we know the intentions of anybody that’s lived that long?”

Henry’s fellow immortal shows up in an episode that has Jo & Co. trying to solve the murder of a man who either is a modern-day Indiana Jones (as Lucas notes in the exclusive clip below)… or a horrible, Nazi-inspired thief.

As the case unfolds, it turns out to have a game-changing connection to both Adam and one of the series’ regular characters. Meanwhile, flashbacks reveal that Henry’s own father was perhaps not the morally upstanding man his son believed him to be.

Press PLAY to watch Dr. Morgan get a grip on the case, then hit the comments with your thoughts: What’s your guess at Adam’s backstory?