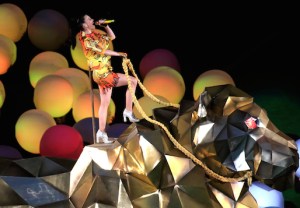 Baby, you really are a firework.

Pop songstress Katy Perry filled her Super Bowl XLIX halftime show with color, pageantry, whimsy and a too-much-isn’t-enough sensibility that meshed well with one of the most hyped sporting events of the year.

The 12-minute set opened with Perry riding on a giant golden lion across the field, singing “Roar,” followed by “Dark Horse” — performed atop a screen that turned the field into an M.C. Escher-esque chessboard.

Perry was joined for the outing by Lenny Kravitz, whose time spent in the Hunger Games hasn’t dulled his ability to rock out like it’s 1997. He took the lead on Perry’s first hit single, “I Kissed a Girl,” backed by pyrotechnics. (Girl on fire, indeed!)

Hit after hit found its way into the rundown, including “Teenage Dream” (backed by singing sharks and palm trees) and “California Gurls” (did we mention her beach-ball bustier)?

Rapper Missy Elliott shared the spotlight with a brief medley of her hits “Get Ur Freak On,” “Work It” and “Lose Control,” with Perry proving a playful backup dancer.

The solid set closed with “Firework,” as Perry circled the arena and actual fireworks launched from the field and the roof of the stadium, and dancers on the field lofted colored balls overhead.

That’s our take! Watch the video below, then scroll down to grade the halftime show and fill the comments with your thoughts on the performance.