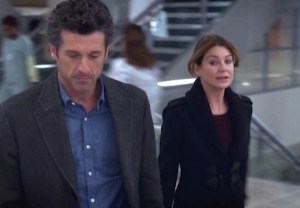 Camilla Luddington has a leg up on some East Coast weather forecasters, because her assessment of Grey’s Anatomy‘s upcoming run — “All storm. No calm.” — passes muster with the boss herself.

“I think that’s a lovely way of describing it,” Shonda Rhimes says of Luddington’s terse tease. “Good for her.”

Of course, as the ABC drama returns Thursday at 8/7c, the coldest front is swirling around Meredith and Derek’s home, in the wake of Dr. Shepherd accepting a D.C.-based job offer from the President of the United States — at Meredith’s urging-slash-taunting.

“That, for them, is a very dark moment,” Rhimes tells TVLine. “I said that this was ‘the season of Meredith,’ and she is very much going to be tested by what happens. This will be the first time she’s without Derek and Cristina, without any of those familiar supports, so this will be about her coming into her own, as a person and as a surgeon.”

Of course, in real life people do manage bicoastal relationships. But Grey’s won’t take the easy road by affording Drs. Grey and Shepherd frequent cross-country visits, or many on-camera phone/video chats. (As Rhimes told EW.com, “It’s highly possible that we might not see Derek for a while.”) Couple that with the marrieds’ ongoing issues and “their obstacles are very intense,” Rhimes warns. “Things are always difficult when people grow apart, 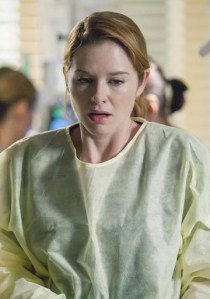 and sometimes they don’t grow back together, which is always the worst. Meredith is having a very difficult time.”

MOMMA DRAMA | “Difficult” can’t begin to describe the dilemma on the horizon for Jackson and April, whose unborn child is presenting with osteogenesis imperfecta (a genetic, fragile bone disorder) — information of which only the Dad-to-be has accidentally become aware. “That’s a really powerful story,” Rhimes says. “Sarah Drew pitched it to us and I at first was like, ‘I don’t want to do this story. It’s going to break my heart,’ but she had such a really beautiful take on it.”

Namely, for Jackson, “who is a man of science,” and April, “a doctor filled with faith,” Rhimes notes, “it is going to be a very interesting struggle” — starting with how Jackson relays the dire diagnosis to his bride. “It is just painful to have to know it, to have to relay it, to have to deal with it,” Rhimes says, “and to have to figure out what to do next.”

SOMETHING ‘WONDERFUL’ | Jackson wasn’t the only Grey+Sloan 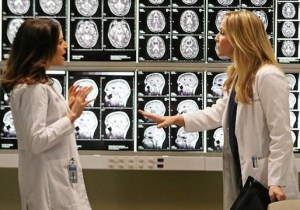 doc to get a shocking earful in the midseason finale. Arizona — having duped Dr. Herman’s medical records into her possession – learned from a consult with Amelia that her mentor’s brain tumor is not necessarily fatal. Of course, to share that news with Herman will require Arizona copping to her snooping. “It’s going to be really interesting watch what happens” on that front, Rhimes says, adding that as a result, “We definitely get more of Geena Davis” (as Dr. Herman). “Arizona and Dr. Herman end up having a wonderful journey together in this back half of the season.”

Speaking of Arizona and journeys, estranged wife Callie will be on one of her own, “trying to figure out who she is by herself,” Rhimes previews. “[Finding herself] was sort of her plan, and it’s very charming to watch her try to get back out there and see what it’s like — and how to figure out how to be a friend with Arizona.” 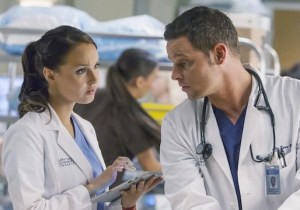 ‘PERSON’ OF INTEREST | Grey’s being Grey’s, the back half of Season 11 won’t be all Sturm und Drang. On the romantic front, Owen and Amelia will grow closer, while Alex and Jo will continue to be tested by the latter’s increasing role as Meredith’s new “person” — though “not in a dark way or anything,” Rhimes makes clear. “I find a lot of humor and charm in watching Jo cope with the fact that Meredith is trying to be the middle spoon in their bed in a lot of ways. Her horror at that concept is kind of great.”

As for Alex, he finds his role in Mer’s life alternately “terrible” and “enviable.” “I think he kind of loves it,” Rhimes says, but as a surrogate for Cristina, “it’s not the same for Meredith!”