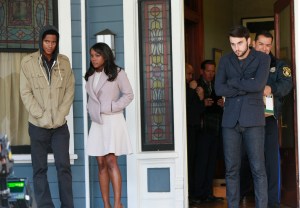 If loose lips sink ships, as the old saying goes, the participants in the homicide of How to Get Away With Murder‘s Sam Keating might be headed for a Titanic-sized disaster.

“All the characters [involved in the killing and disposing of Sam] are very normal people. They’re not used to holding a secret this big,” teases showrunner Pete Nowalk. “And we’ll actually see one of them divulge that secret to someone outside the group” in Thursday’s 2015 premiere (10/9c on ABC). “I don’t want to say who spills the beans,” he adds. “But it won’t be the person you expect.”

TVLine caught up with Nowalk for some hints about what to expect in the final six episodes of Season 1, including whether or not there’ll be another “Why is your penis on a dead girl’s phone?”-type moment and which loose ends will definitely be tied up by the end of the show’s freshman run.

TVLINE | The How to Get Away With Murder Facebook page included a scene from Thursday’s episode where Laurel warns that the first Murder Night participant to go to the police will quickly incur the wrath of the other four. But obviously these folks aren’t really close friends, and also we have the issue that only Wes inflicted the fatal blow. Why shouldn’t, say, Laurel or Connor or Michaela ‘fess up?
That notion definitely comes up — and very quickly. What they do in the middle of the night in a crazy situation is one thing. Once you’ve had a shower and a moment to think, all of them, like any of us would, are looking for a way out. It’s every man for himself. That’s a big question that lingers over all of them [in this week’s installment]. But by the end of Episode 10, we will answer how they’re gonna cope, and why they don’t maybe split from the group.

TVLINE | Is staying together safer than splintering off?
That’s one possibility. They’re making game-time, split-second decisions, and that’s the fun of the rest of the season for me — to watch them all try to get away with this. 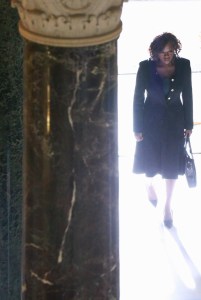 TVLINE | Do you have anything in the second half of the season that matches the OMG-ness  of “Why is your penis on dead girl’s phone?”/Annalise’s wig removal?
[Laughs.] Oh God. I don’t know. I never thought, “Do we have one scene that will make people pay attention?” And that’s not how that [wig removal] scene came about at all. All the stars just aligned — Viola is such an amazing, deep, layered actress that I didn’t even see beforehand the emotional impact that wound up having on everyone. So no, part of me doesn’t know if we do have a scene that good. Hopefully the stories are just as intriguing, though, and the episodes end with really exciting twists.

TVLINE | As you planned the latter half of Season 1 — with the knowledge that ratings were going to warrant a Season 2 — how did you decide what to resolve and what to leave open-ended by the time the finale rolls around?
I made a promise when we made the pilot: We will find out who killed Sam and who killed Lila by the end of Season 1. And I’m really happy I made it. We already got the answer of who killed Sam — and we will learn who killed Lila, as well. I really like tying up a storyline with a bow; I like getting answers. That was very important for the writers and I — making sure we answer a lot of loose ends. Obviously, some will extend into Season 2, but it’s our goal as writers to create new things. We wanted to make sure we weren’t spinning our wheels too much, and that’s what’s been awesome about a shorter season — 15 episodes — we get to answer the questions and move on.

TVLINE | Connor’s sex scenes in the first half of the season have been kind of epic, to say the least. Can we expect anything as outrageous as his copier-room hookup or his courthouse bathroom quickie?
What’s interesting about Connor now… Murder Night has changed them all forever. What’s fun for me is to see how all the characters react to it in ways we don’t expect. Connor’s free-lovin’ sexual lifestyle — in the aftermath of a murder, it may not be so important to him. And something else becomes really important to him. We’re trying to stay true to the character and the storyline — and he changes a little bit through the rest of the season, which only covers about two months in the timeline of our show. He has a lot more to do with Oliver, which has always been fun for us to write. But there’s always going to be interesting sex on our show, though. [Laughs.]

TVLINE | Michaela pretty much lost her mind on Murder Night, too, not just because of Sam’s death and her missing engagement ring, but also because of her showdown with her future Mother-in-Law, which was truly delicious. Will Lynn Whitfield be back for Round 2?
We’re gonna delve into what happens to Michaela now. Does the wedding still continue? How is she psychologically and emotionally still going on with her life? How do you keep planning a wedding when you have blood on your hands? And Mrs. Walker, her future mother-in-law, is this powerful presence, and quite an annoying one sometimes. She does come back. We do have another interaction between Michaela and her future mother-in-law, eventually. We’ll see what happens between her and Aiden now that she’s a big, ole’ murderer. 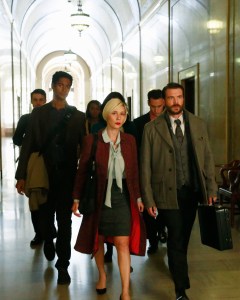 TVLINE | You set up this idea in the pilot where Annalise argues we never know anyone. And at the same time, you keep planting these little seeds about the characters that are so specific, I’ve got to believe they’re going to somehow be significant — Michaela’s mother-in-law calling her bayou trash, Wes talking about his mother’s suicide, Bonnie’s random hookup with a stranger in that hotel lobby. Does it make sense for fans to be latching on to those little moments? Eventually those seeds will bear fruit, right?
Yes, and it’s actually the audience and all of you guys who’ve really encouraged us to do that. What’s great about how you’ve all taken to the mysteries of the show is how we can just plant the seed and not have to explain it in the same episode. In a lot of [shows], you feel like you have to do that because the audience might lose interest or not understand: But everything you just said — like about the bayou trash — this is just real life to me. People aren’t always exactly who they appear to be. Just because Michaela presents the way she does, doesn’t mean she was born that way. We all put on masks throughout our lives. The fun of the show is the mystery of who all these people are and where they came from. Are they exactly who they appear to be? Sometimes they are and sometimes they’re totally acting a part. Over the course of the series and the season, we’ll learn more about each of them. We’ll find out what their home life possibly looked like before they came to college. You guys are so observant we don’t feel we have to spell things out. It gives us freedom to write better. [Laughs.] And to slowly peel away the onion of a character — which is what you do in real life. You meet people, you work with them and slowly find out who they are. That’s not interesting to me. We’re discovering the characters as you guys are too, and the actors help us with that. Nobody tells you a monologue and then you know everything about them that you need to know.