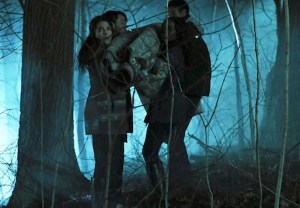 That’s my hashtag, and I’m sticking with it — after a Winter Finale (aka Murder Night reveal) featuring scalding hot sex, gooey-sticky blood, spontaneous vomiting, body rolling (not the kind you see on Dancing With the Stars), one of the nastiest marital fights in network TV history and so much brains-reduced-to-smashed-taters more.

Did I mention the following bit of dialogue from Lurky McChurchmouse to Asher? “I’m a grown-ass woman. I might be drunk, but I know what I want when I want it. So get over here.”

But, yes, I’m burying the big news: After getting knocked over a bannister and to his (assumed) death while chasing Michaela and Laurel With the Flash Drive, Sam rises again and tries to choke out Rebecca. As Laurel, Connor and Michaela stand by, Wes (I’m 99.7% sure — we didn’t actually see it, only the aftermath) smashes in Mr. Keating’s head with the Scales of Justice trophy — and the flash-forwards of body disposal/burning/mental meltdowns play out as expected… right ’til the final scene.

Turns out, when Wes goes back to the Keating residence to retrieve the trophy/murder weapon — prior to a second trip where the Keating Four roll up Sam in a rug and dispose of his remains — Annalise is sitting at her desk.

“I’m so sorry,” says Wes, to the corpse, not realizing there’s another live person in the room.

“Don’t be,” purrs Annalise, who’d been called nothing but a “disgusting slut” by her lying, cheating, nasty piece-of-work spouse earlier in the evening. Let’s be honest — he had it comin’. 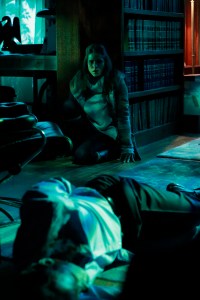 And so, the morning after Muder Night, Annalise summons the Keating Five to her house, tells them Sam had been carrying on an affair with Lila then went missing, and finally asks them to be as honest with the police as possible — the better to track down her missing hubby. Annalise and Wes, however, know that she knows he won’t be turning up anywhere other than underneath some discarded grapefruit rinds and emptied Keurig k-cups at the county waste station. Annalise and Wes have forged a dark pact — they’re committed to burying the whole truth, though to what end, we’ll have to see when the show returns in 2015.

OK, so here’s where it gets tricky… I could attempt to recap the action of “Kill Me, Kill Me, Kill Me” in Point A to Point B to Point C fashion, but moreso than ever, the show’s flash-foward, flash-back, flash-lies-and-deception style would render that a fruitless endeavor. So, instead, let’s examine tonight’s revelations in terms of the Big Questions (yes, I meant to make that upper case) that loom in front of us heading into HTGAWM‘s final six Season 1 installments. (Also, in the spirit of true confession that never quite reached our central characters, there’s no such thing as a HTGAWM recap anyway. You simply MUST watch: My job is merely that of book-club moderator — throwing out theories and talking points to get the larger discussion started.)

* Did you ever expect Sam and Annalise’s happyish-couple facade to unravel as quickly and brutally as it did in their final argument? | Arrrrrrre you rrrrrrrready for Keating Vs. Keating, clash of the heavyweight marital fighters! Boom! There’s Annalise telling Sam that she cheated, too: “His name is Nate and he’s good to me. He knows how to make me scream and groan and sweat.” Pow! There’s Sam with his hands around Annalise’s throat. Boff! Annalise tells him to go ahead, “Kill me! Kill me! KILL ME!” Splat! He tells her she’s not good for anything other than “dirty, rough sex,” that she’s a “disgusting slut.” But is that relief washing over Annalise’s face as her spider-eyed hubby spits his bile? “At least you’re finaly able to tell me the truth,” she says. But instead of bludgeoning him, she flees the scene and heads directly to Nate’s— and we see exactly why he makes her scream and groan and sweat. Side question: Considering Annalise has had access to premium vanilla and chocolate desserts (yes, I am going full euphemism here)  — the kind that burn calories, no less! — how come she been so damn somber all season?

* Anyone get a Murder on the Orient Express vibe while watching Sam’s killing play out? | I described it briefly above, but it’s interesting how pretty much every member of the Keating Four (plus Rebecca) manages to get a hand (or two) dirty on Murder Night. As Laurel sagely notes following Sam’s nasty tumble, they’re all guilty of having broken into the drunk, dead guy’s house — and the whole chain of events was prompted by Rebecca attempting to steal info off his flash drive —  so that further weakens any self-defense strategy. Yeah we could (and maybe should) ask, “Why are Connor and Laurel on board with the plan? Unlike Michaela, neither of their actions really contributed to Sam’s spill/splat — and it’s Wes who ultimately finishes off the homicide by thwacking Sam’s noggin.” But Connor’s vomit in the kitchen sink certainly ties him to the Keating house at the wrong time. And it was Laurel who was running with the flash drive when Sam’s nearly fatal injury occurred. In which case, I accept the circumstances that transformed Mr. Darcy into Mr. Corpse-y, and how Wes, Michaela, Laurel, Connor and Rebecca felt compelled to think like attorneys and try to get around the letter of those pesky Pennsylvania murder laws. I will add, however, that no couple — no matter how young, how attractive, how promising — should be smooching moments after the male member wipes copious blood splatter off his lady love. Are you with me? And if things get dicey, which of our Murder Night co-conspirators will be the first one to flip? My money’s on Laurel, because she’s not going to end up in the state pen just because Michaela’s collapsed in a confessional heap underneath her bespoke Vera Wang.

* Should Laurel should get the trophy? | Girl is smarrrrt, citing case precedent in which murder charges were thrown out due to missing evidence as she advocates taking the trophy (then cleaning it up and hiding it in plain sight)? Plus, her post-murder lies to Frank come across so guilelessly I kinda sorta almost believed the worst thing she’d done in the past 24 hours was steal a silly statuette from hapless Asher?

* How did Peter Nowalk & Co. find room for so much hot sex on Murder Night (although none involving Connor)? | OK, so Bonnie and Asher’s tryst was more comical than steamy — I loved how our girl, having selected a barfly partner whose low stamina had him “spent” in the lobby, was so focused on getting hers that she didn’t even care if her head was bouncing off a pile of textbooks – but it was still pretty graphic. Oh, and that Annalise-Nate coupling had me wondering if ABC might rename this series How to Get Away With Imploding the Brains of the Parents Television Council.

On that subject, what about the illicit couple’s last conversation? “Are we terrible people?” Annalise wonders. “I don’t know. Depends on who you ask,” Nate replies. [Side note: My brain immediately flashed back to a similar two-liner from last Sunday’s The Good Wife, with other woman Ramona declaring, “We’re bad people,” and Peter replying, “I know.”] But here’s the thing: We see Annalise knocking on Nate’s door immediately after Wes returns to the woods with the murder weapon. So, Annalise knows Sam is dead when she’s with her ex-detective lover. Was she maybe thinking of confessing the ugly truth to him, was she firming up an alibi, or was it as simple as needing momentary sexual release in the midst of the craziest evening ever? 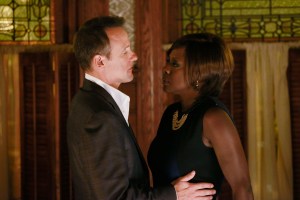 * Was there anything genuine about Annalise’s final phone message to Sam? | Annalise also knows Sam is dead when she places her call to his voicemail — presumably another bit of fiction to cover her butt and make it look like she just thinks he went missing. But I wonder — and I’m really torn 50-50 — if she means anything she says to him. Let’s review the full monologue — while removing Connor’s intercut “Hey guys, I think I just detached the tibia!” — to make heads or tails: “Sam, it’s me. I didn’t think that you would pick up. There’s still so much I need to say to you in person, not by phone, but I guess this will have to do. We built a life together, Sam — 20 years. Whatever we said to each other, all the horrible things, we’ve seen each other through so much, everything good and bad in our lives. So much pain, so much happiness. It’s a rare to know someone that well, to bear witness to so much in someone’s life. So I’m asking you right now, baby, please forgive me for what I said. I didn’t mean any of it and I know you didn’t either. I don’t want things to end this way. I want us to work through this. I want us to be together. Because what ever you did, whatever the truth is, I will stay by your side no matter what. Because I’m your wife and I love you and I need you. So, please come home, Sam. Come home so we can be together. Come home.” Is it possible there’s a part of Annalise who, after all the ugliness, might’ve forgiven Sam for even the crime of murder, might’ve deep down wished some stupid student hadn’t clocked him in the head and ruined any chance she and her hubby could live duplicitously ever after? And even if she didn’t mean any of it, then Annalise Keating is almost as fine an actress as Viola Davis, huh?

* Which of these things will come back to haunt the Keating Five? | Michaela’s missing ring (probably in the dumpster)? Wes smashing the thumb drive with intel about Sam’s affair with Lila? Laurel telling Frank she stole the trophy (when Asher knows it was Michaela who pilfered it)? Connor telling Oliver he’s a drug addict after his Silkwood shower shakes him out of his Murder Night stupor? That bald dude in the car who got a long look at Wes’ face? Rebcca’s quickly aborted hotel-room call to 911? Maybe all of the above? (Here’s hoping for Michaela’s sake there’s nothing in the prenup stating she can’t be arrested for suspicion of homicide!)

* And finally… WHO KILLED LILA STANGARD? | Everyone tonight kept saying “Sam Sam Sam Sam Sam…did it,” but without any actual proof that he was the guilty party. Which leads me to believe we’ve got six episodes left to uncover whose hands actually crushed the pregnant sorority girl’s windpipe. My bet’s on Annalise, with Bonnie a close second. Is it sick that I want it to be Annalise? Well, obviously it’s sick, but I guess I’m just asking for one of you other twisted folks to second the motion? What think you?

Be sure to grade the Winter Finale of HTGAWM in our poll below, then hit the comments with your thoughts!