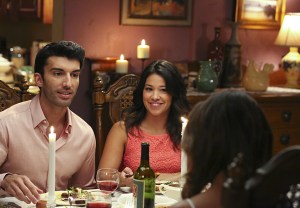 On Monday’s Jane the Virgin (The CW, 9/8c), the titular heroine preps her boyfriend/baby daddy Rafael for dinner with her family, but winning over her disapproving mom Xo will prove even harder than the couple fears.

For starters, Rafael rubs Xo the wrong way when he says Jane should do whatever she wants when it comes to her career, since he’ll take care of her and the baby financially.

“I just can’t get past the fact that he has a lot of money, and it makes me prejudiced toward him,” Navedo says of her character. “So it puts me on the defensive, because I feel like he’s of a different world. He’s not of Jane’s world, he’s not of my world. And what does he want? What’s he up to? Can’t trust him.”

Star Gina Rodriguez points out that the young heroine’s two suitors also serve as an allegory for her professional struggle.

“Jane has a dream of being a writer, but her safe plan is teaching,” Rodriguez says. “I feel like Michael [equals] teaching and Rafael is writing.” Given that Jane’s grandmother Alba is pro-stability and encourages her to take a teaching position, it’s no surprise that Rafael “doesn’t quite mesh right away” with the clan.

“I accept the meeting of the minds,” Ivonne Coll says of Alba’s outlook. “But when he starts to express himself in a way that Xo thinks [is] condescending to her, that’s it. The battle starts there.”

So will the less-than-successful meal cause the couple to split up?

“There’s a lot of breaking points, but what’s nice about it is that, at the end of the day, she’s having his baby, and he will do whatever he can to make sure that things are OK,” Justin Baldoni says.

Meanwhile, on another romantic front, Xo’s vow of chastity leads to an awkward-yet-hilarious embrace with Rogelio.

“When they hug, Xiomara [pulls] away, and Rogelio goes like, ‘Xiomara, what’s wrong? First, yesterday, and now today. Why are you so afraid to have your pelvis touch mine?'” Jaime Camil says, laughing.