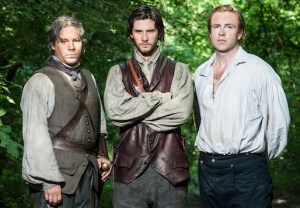 A group of unlikely acquaintances unite to take down a common enemy in History’s Revolutionary War drama Sons of Liberty, and — to paraphrase a famous quotation from the era — it’s a time that tries even the most patient TV viewer’s soul.

The opening installment of the cable channel’s scripted miniseries, which premiered Sunday and continues through Tuesday, covers one of the most exciting epochs in American history: the years right before the colonies turned against British rule and decided to go to war for independence.

It was a time of great unrest, violence and intrigue… so why does Sons of Liberty‘s first few hours feel so slow?

The fault isn’t in the cast, led by Ben Barnes (The Chronicles of Narnia) as Sam Adams, whom we meet in Boston in 1765. Adams has collected taxes for the British and then redistributed the wealth among his friends, making him persona non grata with the Crown. When Redcoats come looking for him at the beginning of the movie, his escape — and the subsequent chase through the city — looks and feels like something out of Assassin’s Creed.

But when that excitement is over, the miniseries falls into a plodding examination of the events leading to war. We see the foppish John Hancock (Rafe Spall, Black Mirror) move incrementally from complete collusion with the British overlords to revolutionary-in-the-making, thanks in part to Adams’ influence. We meet John Adams (Henry Thomas, E.T.), who initially discourages his grieving hot mess of a cousin Sam from doing anything to draw attention to himself. We watch Dr. Joseph Warren (Ryan Eggold, The Blacklist) hang about the edges of the action (though he’ll have more to do in subsequent nights, as will Breaking Bad alum Dean Norris as Benjamin Franklin).

The first installment comes to a climax in February, 1770, when a scuffle between angry colonials and outnumbered British troops turns into the Boston Massacre — and of course Adams is there in the melee, cracking skulls as the snow falls. (Desmond Miles would be proud.)

A few other items that are irksome throughout: Why do some of the colonists have accents, while others don’t? And did people of that era really say — as Hancock does at one point —  the slangy, “I get what you’re doing”?

Anyway, now it’s your turn. What did you think of the miniseries’ opening? Grade the premiere in the poll below, then hit the comments to elaborate on your pick.