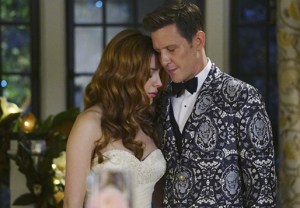 If you thought Revenge was going to take things slow following the death of Malcolm Black, you clearly don’t know this show very well. Sunday’s episode — the last new hour until March 8, if you can believe it — reminded us just how chaotic life in the Hamptons can be, even without a psychotic killer on the loose.

Let’s start with Nolan and Louise’s wedding reception, an appropriately over-the-top affair which was nearly derailed when Emily used an ancient Japanese trick (or whatever) to help Louise remember she did kill her father, just as “Penelope Dreadful” revealed in last week’s episode. But when it came time for Nolan to present his wedding gift — a copy of the original police report from the night Papa Ellis died — Louise remembered the truth, that her mother was responsible for his death, and that she was sleeping with Judge Miller the whole time!

As much as I’ve loved watching Carolyn Hennesy dominate Louise with her dramatics, it was just as satisfying watching ol’ Penny slink away in defeat. And Lyman — who I still wish had been made into a love interest for Nolan — didn’t seem too thrilled when Louise informed him he’s been cut off financially. (Why do I get the feeling we haven’t heard the last of him?)

GAME OF THRONES | Victoria went back to doing what she does best: manipulating her fellow socialites — including special guest star Kim Richards! — into total submission. Things got particularly ugly when newcomer Natalie Walsh (Suits‘ Gina Torres) attempted to hijack Victoria’s inner circle, forcing her to threaten to expose everyone’s dirty laundry in exchange for undying devotion (or, as Natalie so elegantly put it, Victoria “monetized their secrets”). As Nat also noted, “It’s not easy being queen.” But here’s my real question: What was up with the phone call Victoria received at the end of the hour? Could Charlotte be the “death in the family”?

THREE’S A CROWD | As Margaux’s threats began to take shape this week, Emily found herself at a crossroad: Is it finally time to drop the “Emily Thorne” act and resume life as “Amanda Clarke,” she wondered? Ben was happy to lend a sympathetic ear during a brief conversation at a dive bar, and by the end of the hour, he was lending a lot more. I’m honestly not opposed to Emily and Ben having a go at it — call me crazy, but Ben is starting to grow on me — but did Jack have to see them kissing on the way into his house? As Nick Wechsler recently reminded TVLine, Jack is still all about Ms. Thorne (or whatever she’s choosing to go by now) and it broke my heart to see him so crushed.

Revenge fans, do you approve of Emily and Ben’s *ahem* encounter? And do you think Charlotte is really dead? Drop a comment with your review of tonight’s episode below.