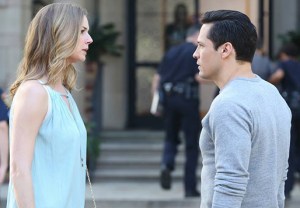 With the threat of Malcolm Black finally behind them, it’s time for Emily and her fellow Hamptonites to look towards the future, which, for Jack and Emily, could also mean looking towards their past.

“We weren’t going to push that,” Nick Wechsler tells TVLine of Jack and Emily’s romantic relationship in Season 4, especially so soon after Aiden’s death. “Jack’s been hanging back, waiting for her to feel ready, but he’s been into her this whole time. We’re slowly getting there.”

In fact, Wechsler says we can expect to see some Emily-Jack sparks in the near future: “In an episode we just shot, there are some larger strides made in that direction.”

Of course, there is still that little matter of Ben being all up in Emily’s business — she seemed to warm up to him after Sunday’s big rescue — but Wechsler assures us that Jack “will try” to keep Bemily from happening.

In other Jack news, it sounds like the Hamptons’ golden rookie will soon strike up another surprising friendship.

“[Louise is] about to meet Jack, which should be really fun,” Elena Satine tells us. “I wonder what they have in store; I really don’t know.”

Revenge fans, are you hoping for a Jack-Emily pairing by season’s end? What do you expect from Jack’s interactions with Louise? And what are your thoughts on Ben? Drop ’em all in the comments section below.