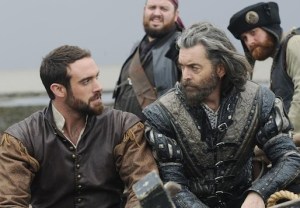 ABC’s Galavant wrapped its eight-episode freshman run on Sunday night by installing a new face on the throne, leaving another princess to be saved and sending two frenemies on a slow boat to… where, Mist Haven? Who knows.

We come here to primarily celebrate ABC’s Galavant as a whole, though I admittedly came away from the finale feeling a bit “meh.” But we’ll get to that in a bit. First, would you agree that this musical-comedy was a breath of fresh air during these bleak winter TV weeks?

Absolutely. I understand that the words “musical-comedy” only appeal to so many viewers (myself included), but this show was just so much fun. It wasn’t too cerebral or gloomy, and you could actually watch it with the whole family.

Well, mostly watch it with the whole family, if you’re prepared to explain to Junior why Gwynne only expected one of her and Chef’s 12 babies to survive, or to account for Madelena’s non-stop shtupping of the jester. Now, what did you think of the scheduling? Some have grumbled that two-episodes-per-week felt like a “burn-off,” though I stand by my original review that since the plot movement was so glacial, you needed that extra helping to come away sated.

I would agree with that. To me, the two-episodes-per-week idea came off like a “test run,” to gauge how viewers reacted to these eight episodes. Plus, it provided a perfect bridge between the winter hiatus and the string of midseason premieres that are upon us. (Which is different from, say, Parks and Recreation‘s two-per-week setup, which does seem a like a burn-off). The problem I have with the scheduling is that Galavant has repeatedly gone up against award shows and major football games. Since the premise appeals to such a specific demographic to begin with, I really felt that putting it up against huge TV events squashed its chances from the start. What I did love about the show, though, was how it brought out the sometimes-unexpected comedic talent of its actors. Did any particularly stand out for you?

Obviously, Timothy Omundson was the real joy here, getting to vamp — and sing — more than even Psych’s musical episode allowed him to. I liked how he was a slightly goofier, far more entertaining version of Robin Hood: Men in Tights’ sheriff. Big, bad Vinnie Jones? Perfect as the king’s No. 1. And I’m pretty sure that anything Luke Youngblood said as Sid made me chuckle.

And I just adored the relationship between Darren Evans’ Chef and Sophie McShera’s Gwynne. (The idea of poisoning an entire kingdom has never sounded so sweet!) Plus, the show really gave its guest stars a chance to shine. Ricky Gervais as the disgraced magician Xanax was a personal favorite.

I was about to say, Darren Evans is perhaps Season 1’s MVP. Poor Chef, always fearing fickle death, having to whip together a feast at a moment’s notice or laboring to “keep it cas” with Gwynne. My favorite guest star was Hugh Bonneville, whose pirate captain took such care to denote mid-song that weren’t quite on the sea. But of course — segue alert! — some of the series’ biggest stars were the songs. Which made your “playlist”?

Going back to Omundson’s fantastic goofiness, I loved “Comedy Gold,” as King Richard attempted — and kinda-sorta succeeded, I guess? — to impress his wife with laughs. And while I found Madelena more and more unlikable as the show went on, I did enjoy her “No One But You” sequence with those mirrors. Thirty-part harmony with yourself is no easy task!

“No One But You” was clever, especially when each reflection gave Mad distinct props a la “You go, girl!” I’m going to go with “Maybe You’re Not the Worst Thing Ever,” which spoofed every movie ballad about perfect romance, and the aforementioned “If I Could Share My Life With You,” which was alternately sweet and loaded with just tragic truths.

With the praise now behind us, I need to talk about the finale. My misgivings can be summed up thusly: The plot was a mess — for one, why did Madelena track down Kingsley (played by Rutger Hauer) if she was only going to swiftly kill him? — and I’m pretty sure I don’t care very much about her being partnered with Gareth. I can’t imagine how their dynamic will be interesting.

I have to agree with you on the Madelena/Gareth front. I have nothing against the radiant Mallory Jansen, but I just don’t see how viewers could be expected to root for her character in any capacity, especially without King Richard’s personality to offset her icy nature. I did, however, like that the plot was left open-ended, especially for Galavant and Isabella. Many of us probably anticipated a happy ending tied up with a bow. But really, after seeing Galavant and Richard getting drunk together, isn’t that dynamic reason enough to come back for Season 2?

That’s what I am holding onto, if there is a Season 2 — that the “buddy comedy” side of the story will offset the weaker elements, as Gal and Richard set out to rescue Izzy and… who, Gareth? Before we go, any Season 2 predictions? Here’s mine: Sid will serve as Gareth’s No. 1 and/or figure into a love triangle with Chef/Gwynne. I mean, why else leave him behind at the castle?

I would really like to see that love triangle play out, if only to watch Sid realize how sick and twisted Gwynne really is — and I mean that lovingly, of course. Mine is a wish more than a prediction: that Gareth and Madelena actually hit it off, somehow. I do recognize the need for a villain, but if Madalena didn’t hate the man sitting on the throne next to her, for once, it could open up some really intriguing plot possibilities.