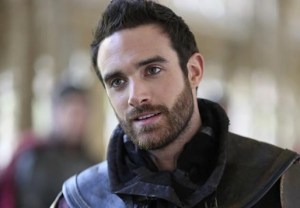 The broadcast and cable networks have more than two dozen shows debuting this winter/spring, including a dive into a hip-hop Empire, a new take on an Odd Couple and a brain-munching iZombie. To help you prep for it all, TVLine is offering some First Impressions .

THE COMPETITION | CBS’ Madam Secretary, Fox’s The Simpsons/Brooklyn Nine-Nine and TNT’s The Librarians 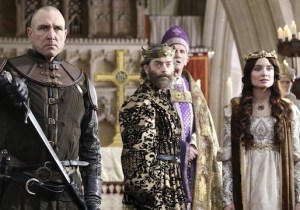 THE SET-UP | The four-minute cold open (posted below) sets the stage far better than my mere words ever could, but simply said: The titular knight (played by Sasse) teams with plucky princess Isabella (David) and sassy squire Sid (Youngblood) to rescue his true love Madalena (Jansen) from King Richard (Omundson) and his henchman Gareth (Jones). Oh — and much of it is set to song, courtesy of composer Alan Menken (Disney’s Beauty and the Beast) and lyricist Glenn Slater (Tangled).

THE FIRST IMPRESSION | Funny thing: With some resignation, given a colleague’s “meh” reaction to the pilot, I finally cued up Galavant… and found myself binge-watching the six episodes available to me. (And I seldom binge anything.) That’s why I think ABC is smart to double-pump episodes, because yes, the plot progression is a bit slow, pausing as it does to allow for song-and-dance numbers and vamping by the more colorful characters (the king included). You’ll want two at a time to come away satisfied. 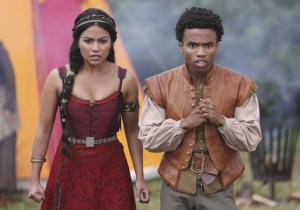 A reader asked if this was in the vein of When Things Were Rotten, Mel Brooks’ short-lived TV take on Robin Hood. But because of the music and greater production values, the more apt comparison is Robin Hood: Men in Tights, with just a whiff of The Princess Bride thrown in. Aside from the earworm-worthy title track, the tunes may not be memorable, but the lyrics are oft clever. (One number knocks knights as “condescending dillweeds in a can”; a ballad between peasants lilts, “We’ll have a dozen kids/Maybe one won’t die”; a Yiddish-filled ditty set in Sid’s hometown sings, “You put the sir in circumcision.”) The story is slight, but there’s a great sense of fun that accumulates, propelling you from one scene to the next.
Omundson is having the best time here, as a clueless monarch who at one point beseeches his No. 1 to help him “butch” up, while David boasts the strongest voice of the regulars. Among the guest stars, John Stamos delivers one of TV’s more memorable vomit scenes (and partakes in a hysterical joust), while “Weird Al” fronts a group of monks who took a(n annoying) vow of singing.

THE TVLINE BOTTOM LINE | As a placeholder for Once Upon a Time, Galavant‘s a fine fit, evoking the fairytale drama’s more lighthearted moments while being just as (meaning: not entirely) family friendly. Being not everyone’s cup of mulled wine, it won’t match Once‘s numbers, but neither should it crater in the time slot.

Watch a preview for Galavant, then vote in our poll below.
http://youtu.be/uwC5lK8OK7I