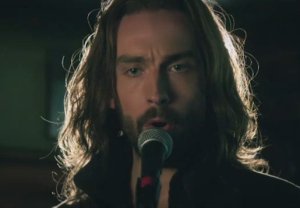 Sleepy Hollow‘s Tom Mison really has no one to blame but himself.

A while back, when kicking around possible Ichabod scenarios with series writer Heather Regnier, the actor found himself chuckling at the idea of his character singing karaoke.

Then it showed up the script for Monday’s episode (Fox, 8/7c).

“Heather Regnier and I had long discussions about it, and there are lots of different routes we could have gone down,” Mison tells TVLine. “Would it have been funny if he had sung a Lady Gaga song? What sort of thing would be best? And also, what sort of voice would Ichabod have?”

Viewers will find out when the Revolutionary War transplant takes the stage twice during the hour: once with Nicole Beharie’s Abbie and once on his own.

Mison says he thought hard about what Crane would choose for his solo number, then came up with a very, very deep cut.

“There’s a shanty from his trip over to America that really affected him,” Mison says, adding that he first became acquainted with the tune while involved with an adaptation of Moby Dick with the British dramatic company Simple 8 Theatre.

The song Ichabod sings is called “A Young Sailor Cut Down in His Prime” — “a beautiful, haunting shanty,” Mison says, laughing, “about a young sailor who dies of syphilis.”

Meanwhile, the episode’s A plot finds Hawley in danger, a situation that illuminates his relationships with the other members of the team. “It’s quite interesting to see how Ichabod, Abbie and Jenny react quite differently” to the mercenary’s dilemma, Mison says. In the beginning, Crane didn’t trust Hawley “at all, wasn’t keen on him, but he’s gradually showing there is some honor to him,” he adds. “Even though he is a mercenary pr—k, he’s occasionally loyal. There’s something decent about him, which Ichabod is intrigued with.”

Admit it, you’re intrigued, too — at least about the singing. The good news is that you don’t have to wait to watch Crane do his thing.

Press PLAY on the exclusive video below to watch Ichabod belt one out while an amused Abbie and Jenny look on, then hit the comments with your thoughts on Ich’s performance and the ladies’ conversation while he’s on stage.