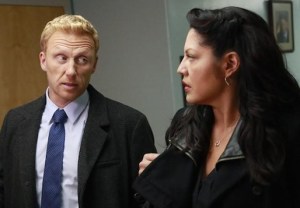 Grey’s Anatomy‘s Callie Torres was angling to have a second baby (via adoption), until her already tenuous marriage to Arizona Robbins crumbled to pieces this fall.

And for so long, Owen Hunt lobbied Cristina Yang to start a family, only to be rebuffed every step of the way — right up until his ex-wife left Seattle for greener pastures in Zurich.

Might Callie (who’s bisexual) and Owen, each now quite eligible and regularly working side-by-side at Grey+Sloan, ultimately come together as a couple, and satisfy their common want?

Series creator Shonda Rhimes, when asked if she ever was tempted to pair the characters in part toward that common goal — rather than steer Owen (played by Kevin McKidd) toward Amelia Shepherd, as seems the plan — didn’t rebuff the idea outright. At all.

The question, though, may be whether Callie (Sara Ramirez) is still itching to give Sofia (her and Arizona’s daughter via the late Mark Sloan) a sibling, now that she is single and gradually getting ready to mingle.

As Season 11 resumes Thursday, Jan. 29, “Callie is trying to figure out who she is, by herself,” Rhimes previews. “That’s her plan, it’s what shes doing, and it’s very charming to watch her try to get back out there and see what it’s like.”