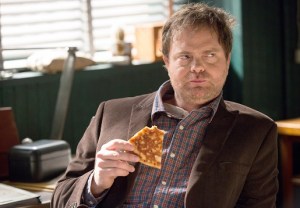 VIDEOS Is Fox’s Backstrom a Rat-Faced Podiatrist, or a Lesbian Terrorist?

And while that makes him exceptional at his work, much like Dr. House, Backstrom is “such a different guy,” Wilson argues. “This is a guy [who is] slovenly, wears his heart on his sleeve, just blurts things, lets it all out.”

If that still rings a bell, Wilson insists, “He’s just much more all over the place” than the “sharp, shrewd pill popper… But there’s been a long and fruitful history of, essentially, really unlikable messes of characters driving shows, and this is definitely in that tradition.”

TVLine visited the show’s Vancouver set to get the scoop on the Fox drama’s Life Unexpected connection, Backstrom’s gay, ex-prostitute roommate and Wilson’s return to the small screen.

ONE AND DONE | After wrapping up his run on The Office, Wilson was hesitant to do another TV series, but Backstrom — the only pilot script he read — was just too “magnificent” of a role to pass up. “I hadn’t read anything like it in a TV show before,” the actor says. “He’s very cantankerous, self-hating, racist, sexist and addictive, but he’s got a lot of heart and humanity and humor, and a lot of different dimensions. And that’s just really rare… It’s very complex and challenging. And I was a little bit afraid of it, so I knew that that was a good thing.” 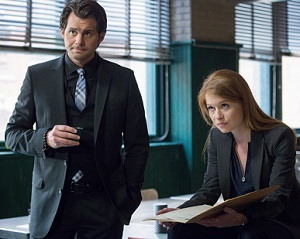 THE OTHER UNIFORMS | Bearing the brunt of Backstrom’s abrasive personality is Detective Nicole Gravely (House of Lies‘ Genevieve Angelson), who more than measures up to her tall colleagues. “I’m in a unit of men who are 6’3″ and 6’4″ and I am a full foot shorter than they are,” Angelson shares. “But I don’t cower when it gets tough and the guns come out. I’m playing a tomboy. I’m doing this because I like to get dirty and roll around in the mud and kick people and stuff like that. God, it’s so fun. It’s actually so fun not playing a romantic interest.”

As for those towering costars, Dennis Haysbert (24) plays Sgt. John Almond, who also is a minister. “I bust you from Monday to Saturday and then I give you salvation on Sundays,” Haysbert says — not that he can reach Backstrom, try as he might. “I also have the presence of mind to understand that he can only save himself.” Meanwhile, Page Kennedy’s (Weeds) Officer Frank Moto is the muscle who drives the titular detective around. “If there’s a heart of the show, I think maybe it’s represented through Moto,” Kennedy says. “He’s there to take care of everybody.”

THE UNEXPECTED CONNECTION | The cast’s other tall man, Kris Polaha, has some thoughts about what his Sgt. Peter Niedermayer would think of his Life Unexpected bachelor. “They both live in Portland, so Niedermayer possibly has gone to Baze’s bar to have a few drinks,” the actor muses. “But Niedermayer is this total geek. He’s an absolute info nerd. He’s got this intense love for life… The guy quotes Kierkegaard and Brecht and the 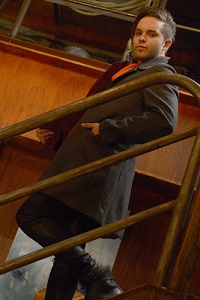 Buddha in the same breath.”

STRANGE ROOMIES | Filling out Backstrom’s world is Valentine, whom portrayer Thomas Dekker (Terminator: The Sarah Connor Chronicles) describes as a “young, gay, punk rocker, ex-prostitute, ex-drug dealer” who lives with the detective. Their relationship is “an anomaly,” but one with a deep history. “Backstrom got him off the street,” Dekker reveals, adding that the two share some personality traits. “They both have very little belief in humanity, and they’re very bitter, very dark, very acerbic and very satirical people. The only people that they trust in their lives are each other.”