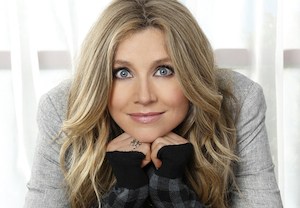 The Scrubs vet will play Amy Gazanian, the ex-fiancée of Wilson’s titular detective. A former social worker and journalist, Amy left Backstrom 10 years ago, largely due to the many flaws in his trauma-riddled character. Now back in town, she has been appointed the Chair of the Civilian Oversight Committee — and in spite of her lingering affection for Backstrom, she intends to do her job and keep an eye on his every slippery, ethically dubious, judicially inappropriate move.

“When we first began our search for this crucial character we all agreed that we needed someone like Sarah Chalke,” shares exec producer Hart Hanson. “Imagine our glee when we actually scored the person most like Sarah Chalke in the world — Sarah Chalke!”

Chalke’s last major TV gig was the short-lived ABC comedy How to Live With Your Parents (For the Rest of Your Life).