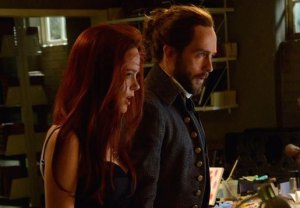 What Sleepy Hollow needs this week is a kickass, Abbie-and-Ichabod-against-impending-evil power hour.

What it gets is the Cranes’ date night from hell, with splashes of the Mills sisters being fantastic and Irving being inexplicably alive.

The latter — plus Ichabod, of course — would’ve been plenty for those of us who don’t hate Katrina, but also don’t need her harshing the Witnesses’ vibe solving crimes. I don’t begrudge Red the chance to do some fun stuff, but let’s leave the heavy lifting to the God-chosen frontline of the anti-apocalypse army, shall we?

Instead, Katrina and Ichabod go sleuthing about in the (literally) cutthroat art world, Lt. Mills warms her seat at the sheriff’s department, and much of this week’s hour feels like a resting point rather than a wind-up for the final handful of episodes of the season — and I really, really hope not the series.

PAINT THE TOWN RED | We watch a man restoring a painting that inexplicably starts dripping blood, and lots of it. As the flustered restorer looks away for a moment to grab a cloth, the blood disappears completely. This will figure prominently in the episode’s A plot.

Over at Corbin’s cabin (#neverforget), Crane is getting all gussied up for a date night with Katrina at the local historical society. He grouses that modern dress eludes him — “How can one be both business and casual?” — but Abbie assures him that his look (think modern Amish preacher) is on point for an evening spent perusing items from the estate of John and Abigail Adams. You know it’s going to be a fancy evening, because Ich is sporting the high ponytail and wispy temple curls of every girl who went to prom in the ’90s. Kelly Taylor would approve.

As it turns out, Ichabod doesn’t run the monopoly on knowing important people in ye olden times: Katrina was Abigail Adams’ midwife and good friend. Abbie gently reminds her partner that his wife has “done things to compromise our team,” but then the witch comes out of the bedroom in a very low-cut, very modern black dress, and Ichabod likey.

ART IS SACRIFICE | The Cranes attend their event, where Katrina is flooded with memories of her dear friend Abigail (Buffy‘s Michelle Trachtenberg, performing admirably even though I’m fairly certain that corset is cutting off all circulation to her northern extremities), who used to fight for those who couldn’t fight for themselves. One of these fights, by the way, involved trying to solve a string of baffling serial murders back in the day. (This, too, will be important in a minute.)

Speaking of murder, the art restorer chats with Ichabod about feeling kinda haunted, then winds up hanging from a chandelier in the foyer with his neck cut. (Note to all historical re-enactors, restorers and/or anyone who just likes old stuff: If you befriend Ichabod Crane, even a little, you will die.)

The murder, coupled with Katrina’s feeling a “dark presence” during the evening, eventually points them toward a painting that hung in the Adams home: It’s of a painter working with his back to the viewer… until the Cranes realize that the painter is actually the killer who’s somehow escaping the canvas. Then his image turns to face them. Creepy.

ABBIE SAVES THE DAY | Hart to Hart Ich and Katrina realize that the killer is after another historical society employee, but while the witch is distracted retrieving some of Abigail’s secret papers from a hidden compartment she suddenly remembers, the murderer escapes the canvas. (Say it with me, Internet: You had one job, K.) On the upside, Mrs. Adam’s writings reveal that she and Rev. Knapp (remember him from the pilot?) worked together to trap the killer in his work… and then the Cranes decide to jump into the painting via spell to save the historical society employee the killer is about to bleed like a pig.

Her spell is successful (for once!) at both getting them in and out, but then the blood-covered murderer follows them into the real world to finish his job. (Nice visual effects on this episode, no?) Thank goodness Abbie shows up with some evil-ending bullets, courtesy of a tip from Hawley and some seriously icky legwork by Jenny. Oh yeah, about that…

THE BOSS IS BACK | Abbie is spending a quiet night at the station with her ancestor’s journal when Frank Irving walks in and surrenders to his former co-workers. Defying Sheriff Reyes’ orders, Abbie gets her old boss alone for a few minutes and informs him that he’s dead… but only Team WTF and his family know that. Everyone else just thinks he’s a cop killer on the lam.

Irving doesn’t remember what happened after the fight with Henry’s avatar, which makes Abbie really nervous: She flat-out tells him that while she really wants him to be him, his blood contract with Henry means she can’t be sure that he’s not evil. Orlando Jones and Nicole Beharie do some really nice, quiet work in this scene, particularly when Frank starts to cry and Abbie’s resolve crumbles just enough to reassuringly touch his hand. (Side note: Have I said before how happy I am he’s not really dead?)

Abbie summons Cynthia to the precinct but won’t allow the Irvings to reunite until she can figure out what’s up with Frank. A physical exam reveals that everything’s normal, but Jenny suggests that maybe Katrina can do a supernatural exam to see if his soul is A) intact, B) clean and C) still there. While we’re all tossing suggestions into the hat here, may I add CAN SOMEONE PLEASE FIND OUT WHAT THE FRILLY HECK IS UP WITH HENRY? Oh, and Reyes notes that the District Attorney’s office may have information that could clear Irving of all charges. The Horseman Formerly Known as Jeremy has got to be behind that, right?