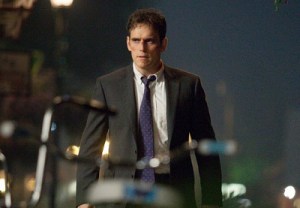 The late ABC drama — which is being revived by Showtime next year — “was an inspiration for the [Fox] show, for sure,” executive producer Chad Hodge admitted at a Televisions Critics Association winter press tour panel on Saturday. The EP noted that Blake Crouch, the author of the books on which Pines is based, was a big fan of David Lynch’s cult favorite.

However, the 10-episode thriller — which follows a Secret Service agent (played by Matt Dillon, There’s Something About Mary) who comes to a deceptively bucolic Idaho town to search for two federal agents who’ve gone missing — “goes to very different places,” Hodge added.

Hodge and EP M. Night Shyamalan also had discussions about what the existence of novels meant for viewers, who could easily pick them up and find out what happens next. In the end, it turned to be “a real asset for us,” Shyamalan insisted. “There’s differences in the book and the show.”

For starters, the big reveal which comes at the end of the first page-turner won’t be saved for the last episode.

“You do find out the big truth halfway through the season and then we continue our story with where book 2 and 3 go,” Hodge revealed. For those burned by mystery dramas of past, the EP promised, “It all adds up. There’s no hole in it. It’s a perfect reveal.”

Shyamalan added that having the plot twist so early in the run allows the show to “live in it” and afterward, “it becomes an entirely different genre.”

“This is character-driven, and people are the most mysterious of all,” Carla Gugino, who plays one of the missing agents, pointed out.

Wayward Pines premieres on Thursday, May 14 at 9/8c.