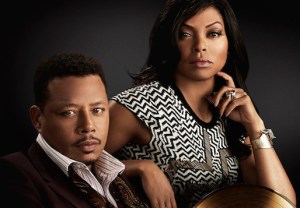 The secret to Empire‘s success?

“What you’re seeing is that shows with people of color can make money, they can be successful,” series star Taraji P. Henson said Saturday at the Television Critics Association winter press tour, when asked about the (already renewed) freshman drama’s cast, which is atypically diverse for a broadcast offering. “And when things make money, people get interested. People want to be a part of it.”

So why has it taken this long for a broadcast network to serve up a primetime soap opera centered on an African-American family? “It was time,” series cocreator Lee Daniels said plainly. “[Cocreator] Danny [Strong] came at me with this idea after [we did the 2013 film] The Butler, and it was just time.”

Empire also has been lauded for bringing to the fore the touchy topic of homophobia in the African-American community, through hard-to-watch sequences in which family patriarch Lucious Lyon (played by Terrence Howard) verbally and physically abuses his closeted gay son, even when Jamal was but a tyke.

“Homophobia is rampant in the African-American community, and men are on the DL — they don’t come out,” Daniels observed. “And I wanted to blow the lid off [that].”

As for the at-times rough language and epithets that come with the derision of Jamal, “We are not doing PC [politically correct] shows,” Howard explained. “We are behind closed doors in a family situation, telling it as honestly as possible. Because that [homophobia] is what’s taught in most [African-American and Latino] households throughout the world.”

By depicting the truth of those despicable dynamics, “We’re giving people the opportunity to see what they’re doing is painful,” Howard said. “I hate that I have to carry that mantle [as Lucious, but] I’m glad I could show the African-American community, ‘This is what you’re doing to yourself.'”