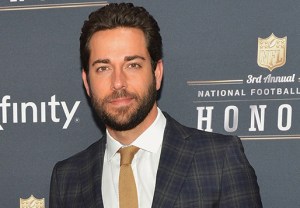 NBC is calling upon a very familiar face to relaunch an equally familiar franchise.

In his first major post-Chuck TV gig, Zachary Levi has signed on to headline Heroes Reborn — NBC’s 13-episode continuation of Heroes, which ran from 2006 to 2010 — TVLine has learned exclusively.

Details about his character are being kept tightly under wraps, but we’re told Levi will be playing a “key” role in the reboot.

“I’m so grateful for the opportunity to work with Tim [Kring], and the awesome team around him, in bringing this to life,” he adds. “Moreover, to be working with NBC again is such a reward in itself, as my bonds and relationships there are deep.”

No longer a stranger to superheroes, Levi co-starred opposite Chris Hemsworth in 2013’s Thor: The Dark World.

As of now, the miniseries’ only other confirmed cast member is Jack Coleman, who will reprise the role of Heroes‘ Noah Bennett (aka HRG), but others could appear.

“Jack’s the way in, but I think – and I’m not trying to be coy because we just don’t know – you will see several of the old cast popping in to episodes,” NBC president Robert Greenblatt said Friday at the Television Critics Association winter press tour.

He also noted that more castings will be announced over the next few weeks.

The following 30-second teaser for Heroes Reborn first ran on NBC during the Winter Olympics in Feb. 2014:

Your thoughts on Levi’s casting, and your hopes for Heroes Reborn? Drop ’em all in the comments section below.