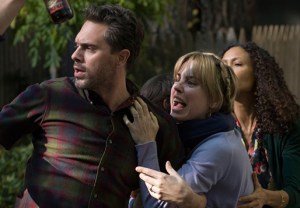 Next month, NBC will deliver The Slap heard ’round the world — and, according to the miniseries’ stars, it may just spark an important debate.

“It’s a very interesting cultural exploration of the changing face of how to treat a human being,” star Uma Thurman said Friday at the Television Critics Association press tour in Pasadena.

RELATED NBC Recast Scoop: Uma Thurman In, Mary-Louise Parker Out in The Slap

Based on a 2010 novel and Australia’s original 2011 series, The Slap stars Zachary Quinto (American Horror Story) as Harry, who sparks a family conflict when he slaps another couple’s misbehaving child. Peter Sarsgaard (The Killing), Thandie Newton (Rogue), Thomas Sadoski (The Newsroom) and Melissa George, who starred in the Aussie version, round out the cast.

“You’re going to see very little black and white, and a lot of gray,” Quinto said of the ripple effect caused by his character. “It’s not just about the slap. All of these characters come to the table with a tremendous amount of internal conflict. The slap is just a launching point.” 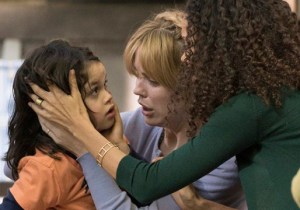 Regarding the miniseries’ eight-episode format, executive producer Walter Parkes said the following installments will become a “short story about one of the characters,” adding that the show is “far more psychological” than its Australian predecessor.

It isn’t lost on the miniseries’ stars that The Slap is rather edgy material for network television. According to Newton, the show has all the creative intensity of a cable series without the often-gratuitous sex, drugs and violence.

“It meant we had to dig deeper into our performances, in a way,” Newton said. “It’s so much nicer for the audience to have to imagine those extremes. We didn’t have to compromise.”

But if you’re worried that the slapped child — or any of the show’s young actors, for that matter — was put in any danger on set, put those fears aside.

“It was a big scene with a lot of technical elements to it,” Quinto said of the pilot’s climactic sequence. “The thing that was most important to everybody was the safety and the wellbeing of the kids. It was a time of really bonding and getting to know each other, even though it was in the context of this horrific act.”

Your early thoughts on The Slap? Drop ’em in the comments section below.