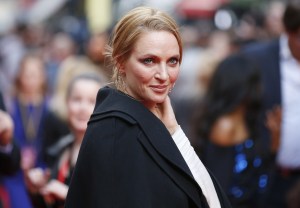 Parker was forced to step aside due to health reasons (the actress is recovering from a bout of pneumonia).

An eight-hour take on the 2011 Australian series, The Slap is about how one man’s punishment of another couple’s child explodes into a complex family drama.

The Oscar-nominated Thurman takes over the role of Anouk, a TV writer who is dating her show’s young leading man (Gossip Girl‘s Penn Badgley).