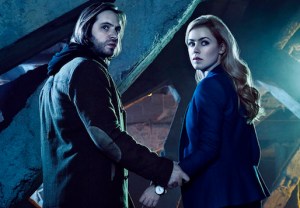 A dirty, disheveled, possibly deranged man accosts you in a parking lot and demands that you help him rewrite history that hasn’t even happened yet. What’s your move?

In a moment, we’ll want to know what you thought of the premiere. But first, here’s a brief review of how the hour played out.

12 Monkeys follows the broad strokes of the 1995 Terry Gilliam movie on which it’s based, with a few tweaks to keep it fresh. Cassie Railly is a doctor (a virologist this time; when Madeleine Stowe played her in the film, she was a psychiatrist) who’s built a reputation as an expert on viral containment.

We see Cassie giving a speech on disease, calling her significant other (Nikita‘s Noah Bean) and then getting in her car — where a man claiming to be from the year 2043 hurls a name at her (“Leland Frost”) and demands to know who that person is.

Problem: Cassie has never heard the name he mentions. This causes the frustrated man, Cole (Nikita‘s Aaron Stanford), to realize that he’s been sent too far back in the past.

In the brief time Cole remains with Cassie, he informs her that a plague is going to start ravaging the world’s population in 2017 — and that Frost is a key player in the pandemic. As the pair run from the police, who’ve been summoned by her boyfriend, Cassie clearly thinks Cole is nuts… until he disappears completely while standing next to her.

Cut to a few years later: Cassie’s insistence on believing Cole’s claims, plus her search for the man he mentioned, has cost her her career and her relationship. But when he shows up at a prearranged meeting spot — still bleeding from the gunshot wound he incurred moments before for him/years before for her — she’s pretty much sold. (A cool “paradox” — or disturbance in the space-time continuum — he creates with her watch doesn’t hurt, either.)

Cole and Cassie embark on a plan to find and/or kill (depending whom you ask) this Leland Frost and thus prevent the sickness from decimating humanity. Their journey brings them to a fancy Washington, D.C. party… where Cole is within sneezing distance of the man in question (played by ubiquitous baddie Zeljko Ivanek)… but will seeing his mission through actually meet its intended goal? And who are these 12 Monkeys of which Frost speaks?

12 Monkeys takes the good stuff from the movie (an overriding sense of dread, a refusal to dumb things down for the viewer, characters for whom you can root) and builds upon it, creating a driving narrative that only occasionally confuses — in the best way possible — when skipping back and forth in time. Plus, Schull and Stanford are well matched as partners on the herculean task of saving humanity, which is a plus for those of us who’ve decided to skip around the timeline of human history with them.

Now it’s your turn. Grade the premiere via the poll below, then back up your pick in the comments!