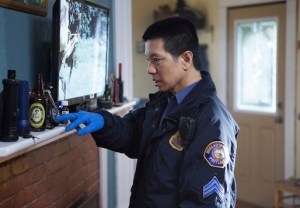 Talk about a Wu’d awakening.

Sgt. Drew Wu, the last of Grimm‘s regular characters to be in the dark about Wesen, had an epiphany of sorts at the end of the midseason finale.

He ran into a chupacabra, he then considered that experience in light of all the other hinky goings-on he’s witnessed in Portland, and he realized that fairy-tale creatures really do exist.

Worse, when Wu confronted Nick and Hank, he realized his friends had known all along… and had been lying to him the whole time.

Star Reggie Lee says Wu’s anger (and shame, and a bunch other emotions we’ll get to in a moment) will be evident in Friday’s midseason premiere and beyond. And while we’re on the subject, cut Wu some slack, would ya?

“Seriously: If you’re going to see monsters for real, in real life, it’s a freaky situation,” the actor tells TVLine. “It’s not like, ‘OK, I saw it last week, and this week I’m good. Sometimes I see tweets that are like, ‘God, Wu, get over it already!'” Lee laughs. “I’m like, ‘If you were in that situation…'” 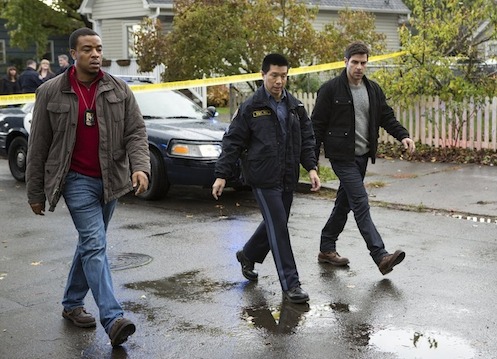 Lee previews that his character’s coming to terms with the revelation will play out differently than it did when Hank and Juliette traveled the same path seasons ago.

For starters, Wu begins the episode in the drunk tank of his own precinct.

“For someone who’s really good at his job, it’s almost worse than checking myself into an insane asylum,” Lee says. “That’s how we pick up, hitting very rock bottom.”

Wu’s Wesen education will unfold over the next few episodes, scenes of which Lee says both “I’ve had a blast” and “I’ve never been so tired in my life.”

He continues, “At the end of the day, you’re f—king tired and you just want to lay on your bed. It almost takes more out of you, the emotional stuff, than the physical stuff, than if I’d been running around all day.”

Grimm being Grimm, it’s likely that Wu eventually will make his own kind of sarcastic peace with the information he’s been handed. One thing’s certain: Now that his character is a bona fide member of Nick’s inner circle, Lee says, his days off are coming fewer and farther between.

While talking with co-stars David Giuntoli and Russell Hornsby, he remembers, “I said, ‘No, they’re not going to have me at every crime scene you guys are at.’ I was waiting for the script” where Wu wasn’t involved in the action, he says with a laugh, “and it never came!”