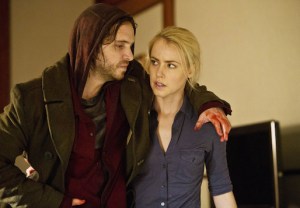 If you feel the need to take notes in order to keep track of the twisting chronology in Syfy’s 12 Monkeys, which debuts Friday (9/8c), don’t worry: Star Amanda Schull does it all the time.

Schull, a Suits alum and self-described scribbler, says she keeps pen and paper at the ready in order to have a little extra handle on where — and when — her character is in the new time-travel drama based on Terry Gilliam’s 1995 film.

The actress plays 12 Monkeys‘ Dr. Cassandra Railly, a virologist whose life’s course is altered when a man from the future (Nikita‘s Aaron Stanford) involves her in a decades-long plot to avoid the global pandemic he somehow survived.

The world-changing event has happened for him in 2043, but not for her in 2015, and the series’ action jumps in time and location faster than you can say “paradox.”

Bottom line: It’s easy to get turned around in the story.

“I don’t always know exactly what I know at that time, what does my character know, what doesn’t she know, what has happened, what hasn’t happened,” she tells TVLine. So Schull keeps her notebook nearby during the work day.

Acknowledging that Gilliam’s source material is “a little bit of a brain teaser,” Schull credits the TV incarnation’s producers and writers for creating an intriguing sci-fi saga that doesn’t collapse upon itself.

“They have it all drawn out, and everything makes sense. So it is science-fiction — obviously, time-travel, and [Cole is] disappearing — but we do it in a way that… is as real and based in reality as it can possibly be.”

The show’s reality, malleable as it is, follows Cassie as she joins Cole’s endeavor — a commitment that happens rather quickly once the time-space continuum gymnastics begin.

Schull maintains that you’d probably make preventing a plague your life’s work, too, if you’d heard someone forecast a grisly end of the world and then disappear in front of your eyes.

“Maybe some people would question themselves. She never questions herself. She knows what she saw,” she says. That innate certainty, combined with a career spent preparing for the very event Cole says is going to happen, makes Cassie the perfect person to accompany the time-traveler on his mission.

“If [Cassie] chooses to ignore his warnings, she basically is spitting in the face of all her years of work and study,” she says. “If she drops the ball, the end of the world is basically on her shoulders.”