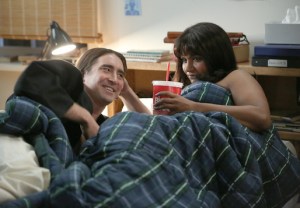 You always remember your first. Unless you’re Mindy Lahiri. Then, you harangue your first at a bar until he reminds you that he was your initial bumper of uglies.

This week’s Mindy Project finds Dr. Lahiri out on a Danny-encouraged night on the town, and that’s where she runs into Alex, the geeky-college-kid-turned-tech-billionaire she deflowered (and vice-versa) in 2004.

Alex is hot. He’s self-assured. He’s played by Lee Pace (Halt and Catch Fire). Though she doesn’t recognize him at first — he used to have a ponytail, for starters — she’s happy to see him. And somehow, Danny’s name doesn’t come up in conversation…

Thank goodness Rob Gurglar, Mindy’s fellowship supervisor who’s living down the hall from her after separating from his foot-unfaithful wife, is along for the evening after a pity invite from Mindy. While Mindy and Alex reminisce about their single night of dorm-room lovin’ — after which she basically gave him the idea for a web site that netted him billions — Gurglar gets more and more incensed that Mindy hasn’t mentioned she has a boyfriend.

When Alex tells Mindy he mailed her in 2012 and asked her to attend People‘s Most Beautiful Billionaires (heh) gala with him — the message went to her spam folder at the time — Rob finds the email and forwards it to Danny.

Mindy quickly has Peter delete the missive (via means we’ll get to in a moment) and marvels at what her life might’ve been like had she taken Alex up on his 2012 offer. But eventually, she reveals that she’s in a relationship… and as we find out a moment later, via one pissed-off Chrissy Teigen, so is Alex. As the rich guy’s lady, the model is a ball of cheekbones and anger, and Mindy retreats to her dorm to call Danny and tell him how much she loves him.

Meanwhile, back in New York, Danny and Morgan’s evening of hanging out at Dr. C’s place turns into an evening of eavesdropping on Peter and (they think) Lauren via their apartments’ shared wall.

There’s some Three’s Company-level misunderstanding in this episode, so let’s just cut it down to the basics. Lauren isn’t two-timing Jeremy, but she is taking advantage of a Friend-Zoned Peter for babysitting. And though Peter talks his way into Danny’s apartment and deletes the email, he later tells Danny that Mindy’s up to some shady business. There’s also a bit about Jeremy and an opera cape, but seriously, it’s nothing. But you know what’s something? Peter kissing Lauren at the end of the episode.

When Danny and Mindy chat on the phone later that night, he asks her about the deleted email and for once, she tells him the straight truth: It was a silly thing from an ex and it means nothing. While he reiterates that he trusts her, I can only wonder how she so thoroughly cleaned up the Nutella she lobbed at her wall at the beginning of the episode.