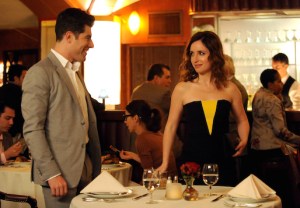 New Girl‘s Schmidt has a powerful new lady and an even more powerful burning sensation in his gut, and those two things will make for much hilarity in the Fox comedy’s next few episodes.

“The stuff with Zoe Lister-Jones” — who debuted last week as smooth-talking city councilwoman Fawn Moscato — “is really funny,” star Max Greenfield tells TVLine during a visit to the show’s set, adding that “the Fawn/Schmidt relationship is just full of sex.”

Among the (SFW) moments: In an upcoming installment, “we go to an anti-gang initiative, and I krump,” Greenfield previews.

Don’t worry; he did his homework.

“I watched a video of Twitch doing it on So You Think You Can Dance,” Greenfield says. “I thought, ‘I can do a version of that.’ So it worked out.”

But before Schmidt can get down with his bad self, he’s got to deal with a small-yet-excruciating health concern: His quest to become a millionaire is giving him an incredibly painful ulcer.

In Tuesday’s episode (9/8c), the stress literally eats away at the neurotic roomie (or, at least, his stomach lining), until his only recourse is to allow Nick and Kai to wrap him up like an infant.

But does it work? Press PLAY on the exclusive sneak peek below to find out.