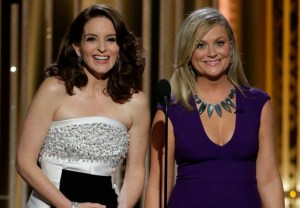 The expectations were high, the hosts self-deprecating, the zingers at the ready as Tina Fey and Amy Poehler took the stage Sunday for their third stint hosting the Golden Globes.

After well-received outings in 2013 and 2014, the pressure for the comedic actresses to pull off a third successful evening was high. After all, their delivery of that George Clooney/Gravity joke from last year’s ceremony was near perfection; would they be able to top it?

From the raucous reaction inside the Beverly Hilton Hotel’s International Ballroom, that answer seems to be a resounding “hell yeah!” But we all know how liquored up those Globes attendees get, so in a moment we’ll ask for your likely-more-sober opinion of the ladies’ third monologue.

But first — and this is the fun part — here’s a selection of Fey and Poehler’s best gems:

* Poehler commented on Patricia Arquette’s success in the years-in-production movie Boyhood, “proving that there are still good roles for women over 40… as long as you get hired when you’re under 40.”

*”Chris Pine!” — Fey, not waiting for the second option while playing “Who’d you rather?” with Poehler

* “George Clooney married Amal Alamuddin this year. Amal is a human rights lawyer who worked on the Enron case, was an advisor to Kofi Annan regarding Syria and was selected for a three-person UN commission investigating rules of war violations in the Gaza strip. So tonight, her husband is getting a lifetime achievement award.” — Fey

* “In Into the Woods, Cinderella runs from her prince, Rapunzel is thrown from a tower for her prince and Sleeping Beauty… just thought she was getting coffee with Bill Cosby.” — Poehler

Rate Fey and Poehler’s Globes monologue via the poll below, scroll down to watch the monologue (and other highlights) again,  then hit the comments to elaborate!