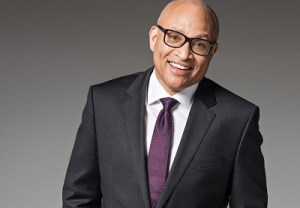 One big question loomed as  The Nightly Show With Larry Wilmore presented at the Television Critics Association press tour in Pasadena on Saturday: What is the new Comedy Central series?

Allow the show’s host to clear that up for you.

“It’s a hybrid of The Daily Show and Politically Incorrect — those two types of shows,” Wilmore said of his program, which will fill the network’s 11:30 time slot left vacant by The Colbert Report.

RELATED Save the Dates! Your Guide to 125+ January Returns, Debuts and Finales

According to Wilmore, The Nightly Show will consist of two main parts. The first will be scripted, while the second will include a panel discussion of daily events. Wilmore will have his own team of contributors, and while there will be celebrity interviews, they may not always be tied to a star’s upcoming book or movie release.

“We’re finding out what all that means as we do the test shows [next week], but we have a real good sense of where we’re starting from,” Wilmore said. “Our show is a cousin” to those that analyze the news, “George Stephanopoulos, Meet the Press, Face the Nation, that kind of thing.”

Given the onslaught of tough news topics in recent weeks — including a tragic shooting at the French satirical publication Charlie Hebdo — Wilmore addressed how his writing team will approach such heavy material.

PHOTOS The Colbert Report‘s Final Episode: Murder, Santa Claus and So. Many. Celebrities.

“Not every topic is a laugh-generating topic,” Wilmore said. “You have to judge what topics you want to put on your show that day, and which will be more ripe for discussion later on.”

After serving as The Daily Show‘s “senior black correspondent” since 2006, Wilmore said he’ll bring to his new gig quite a few lessons learned from Jon Stewart.

“Jon always raises the bar on that show. He pushes you in directions that you’re sometimes uncomfortable with,” Wilmore said. “That’s the way I like to approach things, too. I like to unearth something.”

Will you tune into The Nightly Show With Larry Wilmore? Hit the comments with your early thoughts on the series.