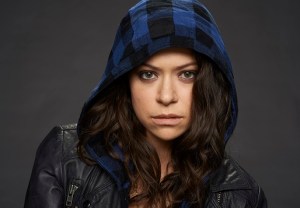 The clones are under attack from all sides on Season 3 of Orphan Black.

One of the biggest dangers comes from the newly introduced male clones, particularly the scary Rudy, AKA Scarface.

“Rudy is a threat to the sisters,” co-creator John Fawcett revealed at a panel for the BBC America drama at the Television Critics Association press tour in Pasadena on Saturday. “Rudy is a dangerous character who’s very, very smart and very ruthless. The guy’s seen some action. He’s a trained fighter.”

Added his portrayer Ari Millen: “He likes to get under people’s skin. He will just pick at you until you blow up, and then he’s won.”

That quality was on full display in a trailer screened at the session; during the preview, the captured Project Castor clone and Sarah have a tense confrontation.

“You’re a legend, Sarah Manning,” Rudy greets her before warning her that she’s trusting the wrong people by cooperating with Leda and proving just how much he knows about her life by bringing up Kira.

Meanwhile, James Frain (Grimm, Intruders) makes his debut in Episode 1 as Ferdinand, “a really amazing, scary guy that’s come in from Topside and is a very dangerous threat to our girls,” Fawcett previewed.

Read on for scoop about Alison’s ex, Felix and Cosima’s friendship, the season finale and more.

SNEAK PEEK | Some more highlights from the Season 3 teaser reel: Paul shares a scene with an imprisoned Helena; Cal gives Sarah a passionate kiss before telling her to go save her sister; a scorpion – eek – crawls on Helena; and a possible new female clone makes her debut.

BONDING TIME | Given the popularity of Felix and Alison’s dynamic duo, “We’ve taken that further in Season 3 in developing Felix’s relationship with the other clones, especially Cosima,” Fawcett revealed. As she spends quite a bit of time in Fee’s loft, “She just treats him like a friend,” talking about love and life, Gavaris described.

TROUBLE FOR TEAM HENDRIX | Justin Chatwin (Shameless) will play “an old high school flame of Alison’s and kind of gets in the way and causes issues between Donnie and Alison,” Fawcett teased.

INDEPENDENT GUY | When the series first premiered, Jordan Gavaris focused on making Felix brash, the actor shared. But given everything Sarah’s bro has been through the last two seasons – and the physical strain on Gavaris — “now is the right time to start showing” some of that wear and tear, he said. And while the story is still very much about Sarah’s journey, Felix is “starting to think for himself, asking his own questions. [We] see him a little bit more independent from everybody else.”

THE BIG FINISH | Fawcett called Season 3 “the hardest to write yet… It’s been challenging, that’s for sure.” But all the hard work pays off, because “there is some big things cooking for the season finale. The thing I’m most excited for is we have an incredible season end, and I think probably the best yet.”