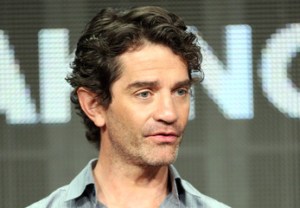 Look for some new guests the next time the Orphan Black clones throw a dance party.

BBC America announced on Tuesday the addition of five incoming cast members when the sci-fi favorite returns for Season 3 next year.

James Frain (Grimm, Intruders) will guest star as Ferdinand, “a well-educated, ‘cleaner’ who is both charming and intimidating” — and who happens to be “a powerful player in a secretive, multi-national political faction that operates with questionable ethics and a ruthless approach.” In other words, he and Sarah ought to get along swimmingly.

* Lost Girl‘s Ksenia Solo as Shay, “a soulful and compassionate holistic healer with a great sense of humor destined to become a new friend to Cosima.”

* Warehouse 13‘s Kyra Harper as Dr. Coady, “a ruthless doctor and advisor to the military,” a woman who is “outwardly the soul of reason, but her maternal, nurturing manner conceals an agenda that even her superiors do not suspect.”

* Murdoch Mysteries‘ Earl Pastko as Bulldog, “Ferdinand’s silent, imposing and violent personal bodyguard. Communicating with his boss by looks only, Bulldog carries out the dirty work of his shady employers.”

As TVLine reported last week, Shameless star Justin Chatwin is also set to recur on Season 3 – and BBC America officially confirmed the casting in its announcement. He’ll play the ruggedly good-looking, street-smart, Jason Kellerman, “a savvy drug-dealer in the guise of a charismatic businessman.”

Season 2 ended with the revelation that a set of male clones (played by Ari Millen) made Tatiana Maslany’s Sarah, Alison, Cosima, Helena and Rachel slightly less unique than initially believed.

Stoked about these new additions to the Orphan Black universe? Sound off in the comments!