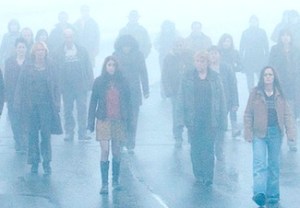 The dead are back in A&E’s The Returned, but they won’t be going about their lives the way they did in Les Revenants, the French series on which A&E’s new project is based.

“The starting point is similar,” executive producer Carlton Cuse (Lost) said at a Television Critics Association press tour panel for the remake on Friday. However, “over time, our show becomes quite different” — especially around Episode 6.

“The French show became very genre, incident-heavy at the end of the eight episodes,” he continued. “We take a different turn at that point. The show’s fairly distinctly different by the end of the first season.”

Executive producer Raelle Tucker (True Blood) noted that “it’s not a competition between that [original] show and this one, but really a way to honor it and make something of our own.”

But the premise, which finds long-presumed dead people suddenly reappearing to their loved ones, “is such a universal concept, and there are so many ways to play that… I think the character work is significantly different.”

As for comparisons to another series about the rising dead, “Very consciously, we did not watch Resurrection,” Cuse said. “We felt like that wouldn’t be good for our creative process.”

But Cuse did borrow from another project by casting Lost vet Mark Pellegrino on the A&E series. “It’s a very tough role because this character has really been destroyed by the death of his daughter,” the EP described. “[Mark and I] had such a good experience working together on Lost. It was the right mix of the actor and the character.”

The Returned premieres March 9 at 10/9c.