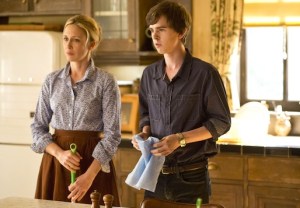 Make your reservations now: Bates Motel will reopen its doors for Season 3 on Monday, March 9 at 9/8c, A&E announced Friday.

Per the network, Bates‘ third season focuses on “the evolution of the Bates family and dives head first into Norman’s waning ability to stay in denial about what’s happening to him and the lengths he will go to gain control of his fragile psyche.”

As for Mama Bates, she’ll be extra wary of her son as he becomes more and more of a — dare we say it? — psycho.

The cabler will also debut its original drama The Returned on March 9 at 10/9c. From executive producers Carlton Cuse (Lost) and Raelle Tucker (True Blood), the Resurrection-esque series — based on France’s original adaptation — zeroes in on a small town that is forever changed when local residents, long presumed dead, suddenly reappear.

Excited for more Bates Motel? Planning to check out The Returned? Hit the comments with your thoughts.