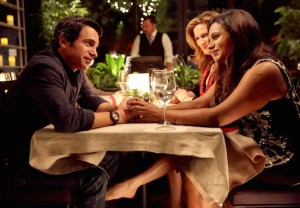 Mindy starts her hard-won Stanford fellowship on this week’s Mindy Project, but campus life isn’t the whirlwind of Felicity boys and keggers she envisions.

Her advisor hates her. Her confidence takes a giant hit. And she and Danny have another one of those trying-to-figure-out-where-our-relationship-stands moments. Can their nascent couplehood overcome the distance between New York and California?

Read on to find out what happens in “Stanford.”

BACK TO SCHOOL | While Danny helps Mindy move into her dorm room at the university, Dr. Lahiri muses about whether this collegiate experience will rival Keri Russell’s fictional one. “Who will be my Ben? Who will be my Noel? Who’ll be my Greg Grunberg?” she asks. “Me, you dope,” Danny gruffly answers. “I’m all the guys.” (Heh. On a related note: Please don’t cut your hair again, Min.)

It’s clear that Mindy is treating the fellowship like it’s Undergrad 2.0 rather than a mid-career training; apparently, her first go-around plus med school didn’t dampen her enthusiasm for communal living and cramming for tests. Danny mentions that he went to medical school with her advisor, Rob Gurglar, and that he’s happy to put in a good word for her. But nope: Like the “We Can Do It” poster she pinned over her bed, Mindy wants to succeed on her own. (Side note: The bit about Mindy thinking Rosie the Riveter is Taylor Swift, and then Danny not knowing who the pop singer is, was classic Mindy Project. It may one day get old… but that day’s not here yet.)

FULL-FRONTAL FOOTSIE | Mindy’s efforts to crush the fellowship tank when she shows up for a kickoff party in a tight pink minidress… only to find that the “BASH” she’s attending stands for a “beginning of academic scholarship hangout” — AKA, a lecture. Dr. Gurglar is mean and highly annoyed by Mindy’s Elle Woods schtick, so she caves, drops Danny’s name to curry favor and suggests a double date with Gurglar and his missus. Gurglar perks up at hearing Dan the Man’s name, and he agrees. 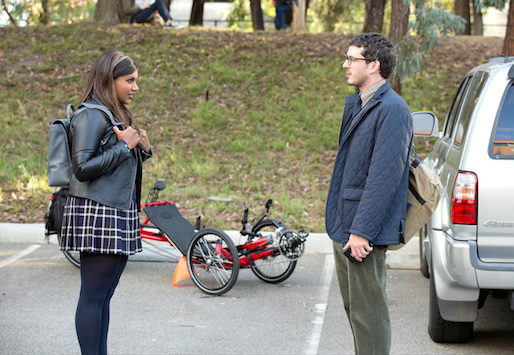 So Danny reschedules his flight to attend a meal with Rob and his bitter wife, Barb (Suburgatory‘s Ana Gasteyer). After watching Dan and Min schmoop all over each other during the meal, Barb decides to get in on that action: She sticks her bare foot in Danny’s lap and — because he thinks it’s Mindy’s tootsie doing some X-rated tickling — he’s good with it. Wait a sec, are they at Friendly’s? Because that sure was one Happy Ending of a dessert. Holy shirts and pants, this show is milking (too soon?) sexual comedy for all it’s worth this season.

‘A’ FOR EFFORT | Danny is skeeved and Mindy is mad when they suss out what really happened. Everything somehow escalates into an argument where she accuses him of not thinking she can succeed on her own, but he keeps calm and points out that she doesn’t really believe in herself, and things aren’t good between the docs as he leaves to catch a redeye.

Mindy finds Dr. Gurglar and tells him that Barb is “stepping out on you” (heh), a revelation that destroys him — and distracts him enough that he’s promptly hit by a campus-security vehicle. While stitching him up at the hospital, they come to an understanding: Mindy says she’ll work very hard in the program and Gurglar promises to treat her like he treats everyone else. Even better: He asks her to stand in for him during a procedure that day.

But Mindy, realizing that it’s the right thing to do, in turn offers the position of honor to another classmate who’s already proven her hardworking nature. And when Dr. L returns to her room, she’s surprised to find Danny there: He didn’t want to leave while they were both upset. She admits that she wants — but doesn’t need — him to be there, and the crazy, lusty, neurotic pair’s path is smooth once more.

THERE IS NO ‘JERSICAH’ IN ‘TEAM’ | Back in New York, Morgan recruits Jeremy and Peter for the practice’s basketball team yet loses another player when Tamra learns he’s been dating Jessica (“Jersicah!”) since Christmas. Tam forms her own team and delights in decimating Morgan… until Peter advises that she be the bigger person. And Tamra’s newly magnanimous nature is quickly rewarded when med student TJ asks her on a date.