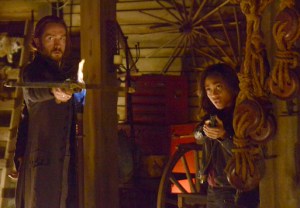 Sleepy Hollow must’ve read a few too many women’s magazines as of late, because this week’s episode really takes the New Year: New You! theme to heart.

Repeatedly, resoundingly, unrelentingly to heart. And while we can probably go a while without hearing Abbie draw parallels between trendy fruit and her journey as a Witness, the hour’s last few moments — where Irving resurfaces as one of the living! (or, at least, not one of the dead) — made up for some of the episode’s flaws.

HENRY HIGHTAILS IT OUTTA THERE | The hour picks up a very short time after Henry kills Moloch. We see Ichabod regain consciousness, and though it’s Katrina’s name he mutters first, the relief that floods his entire being when he sees Abbie alive and well is palpable. “Oh thank God,” he says as they clutch each other, and no matter what else I think about this episode, that moment is Ichabbie gold.

Jenny and Katrina also are OK, but Henry is missing. “He risked everything to save me,” Katrina says. Well, that’s one interpretation of what happened, yes.

Cut to six weeks later, as Abbie and Ichabod peruse a farmer’s market and wonder A) where Henry is, B) what’s behind the random weirdness they’ve encountered in the last month-and-a-half. (There’s also a mildly amusing discussion in which Ich mistakes the name of a hybrid fruit — grapple — for the verb.) Crane then notices a brimstone-smeared apple filled with worms and theorizes that it’s evidence that “something supernatural is gestating.”

Back at the archives, he’s wildly gesturing to corkboards full of supernaturally hinky photos and loudly asserting his out-there theories while his partner looks on, bored; all he needs is an “I Want to Believe” poster and a red Speedo, and he’s Fox W. Mulder.

Abbie, on the other hand, wants to talk about what their lives could be if they didn’t have to fight evil. “We have to reinvent ourselves,” she tells him — but he’s got a jump on that, because he’s already invented himself as someone sick of Katrina’s ridiculousness: Ichabod is sleeping at the archives while Katrina holes up at the cabin during a mutually agreed-upon time-out in their marriage.

TOUCHED BY AN ANGEL | To take Ichabod’s mind off his marital woes, Abbie agrees to accompany him to a farm where weirdness could possibly be going down — though she’s skeptical. While they scan the grounds, Crane and Mills discuss whether the apocalypse is over and what they’d have to do if it were… and goodness gracious, I forgot how much I love it when the Witnesses get to spend time together, talking about their shared duty, without interruption and/or fighting.

Of course, they find some robed evil beasts chanting some terrible nonsense, and just as the Witnesses confront the monsters, a black-winged angel swoops in and starts kicking tail with a glowing circular boomerang dealie. “I’m Orion,” he says. “Are you friend or foe?”

Orion knows the Witnesses’ whole deal, and he assures them “I mean you no harm.” Um dude, your crazy eyes suggest otherwise. Orion, shorthanded: He was a prisoner in Purgatory until the night of Moloch’s death, and now he’s on the hunt for those who want to amass power to bring about the end of the world. And Abbie is picking up what he’s laying down, big time. 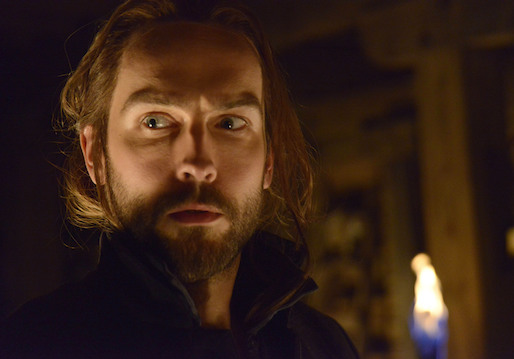 REVERSE THE CURSE | Meanwhile, Katrina’s watching over a chained-up Abraham in the Masons’ cell — and from the look of her black, long-sleeved mesh shirt and black corset, somebody got a gift card to Hot Topic for Christmas!

She summons Ichabod to the chamber (via text, of course. God forbid the witch do something cool, magical AND useful) to ask him to help her separate Abraham’s humanity from the Horseman. She says the Witnesses owe her… hold up, Red.

I’m no hater (and believe me, you need all the friends you can get right now, if Twitter is any indication), but the idea that Abbie and Ichabod owe you anything is so insane, it needs a bed at Tarrytown Psych. I’m not sure that screwing up spells, failing to kill Baby Moloch and getting captured — not to mention stranding Abs in Purgatory — entitles you to anything more than a membership in the Lame of the Month Club.

Anyway, Katrina claims that her and Ichabod’s love for each other “drove him to this terrible state, and I believe our love can bring him back.” Ich looks skeptical but agrees to consider it.

Back at the farm, Orion mentions that he’s gunning for the Headless Horseman first. Abbie’s like, “We know that guy! Let me show you directly to him!” He’s so pleased, he gives her a charm. “Hold this charm and think of me” whenever she’s in need, he says. “I can find you.” But don’t forget to chant valar morghulis…

EGG-CELLENT | Let’s take a minute to check in with Jenny. She’s working big hair and a little leather skirt as she flirts with a bartender at the pub, but a call from her sister puts her right back into research mode. She calls Hawley, who shows up with a giant egg — oh wait, I know this one! They’re going to exchange it for the location of a secret rave! No, I was wrong; they bust it open — after some flirting where he tells her he’s still into her and she’s all, “RESPECT THE SKIRT, bro” — and find out that the robed demons are meeting up at Headless’ carriage house.

BABY DID A BAD, BAD THING | By the time Abbie and Orion make it to the Masons’ cell, Katrina has set Abraham free on the condition that he (wait a sec, let me try to type this without dissolving into giggles) PROMISE NOT TO KILL ANYONE. He’s evil incarnate, guys! I wouldn’t put much stock in his vow, even if he crossed his heart and hoped to — yeah, nevermind.

Ichabod’s mad and goes to the archive to do some hate-researching, while Abbie finds Orion by summoning him. Ol’ Feathery talks a good game about how they’re warriors and how he wants to cleanse humanity of all its bad parts; just as he’s unlocking a new level of zealotry, Crane calls and warns Abbie that Orion historically has shown up before bad stuff went down (Pompeii, Syria, etc.). Suspicious, she brings the angel to the carriage house (thanks to the intel from Jenny and Hawley), where he immediately does battle with Headless.

Eventually, Orion sticks his blade into Headless’ back — and the Witnesses realize they have to save Abraham to stop Orion’s insane power grab. So they rip the weapon from between the horseman’s shoulders and destroy the circular blade. Then, in a move that makes me laugh out loud because what is going on here?, Ichabod hands the Horseman’s axe back to him. I know Abbie cites the “enemy of my enemy is my ally” idea, but wow.

As Orion takes off in anger, Ichabod reminds Abraham that if he kills anyone while Katrina’s looking into restoring his humanity, he’s toast. The Horseman of Death grudgingly agrees but yells that he won’t be a prisoner again. So the Witnesses leave, because apparently we just do whatever Abraham says now? Yeah? OK.

GUESS WHO’S BACK? | After briefly suggesting that he and Katrina “redefine” their marriage, Ichabod processes the day’s events with Abbie. She says it was good that they keep each other in check, and he agrees. “No matter what obstacles we face or how many disagreements we have, our bond cannot be broken,” he says, adding, “Witness represent!” (Heh.)

And now for the most exciting event of the episode: A barefoot man stumbles into a convenience store, takes a carton of milk out of the refrigerated case and begins gulping it down. Of course we know it’s Frank Irving, back from the dead, but it’s still pretty satisfying when the camera finally settles on his face. “Is this heaven or hell?” he asks the cashier. “Neither, man,” the kid replies. “It’s Sleepy Hollow.”

Now it’s your turn. What did you think of the episode? Did you like the return of the topsy-turvy camera work? How about Jenny in her going-out gear?