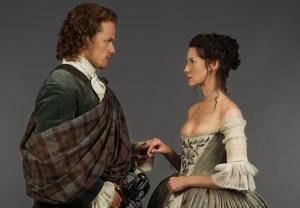 Watch even one episode of Starz’s Outlander, and you quickly understand that time is a very fluid concept.

So that’s why, even though the historical-romance-with-a-dash-of-sci-fi doesn’t return until April, we’re already taking a stab at casting two roles that are integral to Season 2 (and beyond).

[Warning: If you haven’t read Diana Gabaldon’s series of Outlander novels and don’t want to be spoiled about what’s ahead, it would be a verra good idea to bail out of this post now.]

One of the characters, the Rev. Wakefield’s adopted ward Roger, already has made his on-screen appearance; he was the apple-cheeked little boy snacking on biscuits in the midseason finale.

But Season 2 likely will follow the format of Gabaldon’s Dragonfly in Amber, which opens in 1968 with a decades-long time jump that re-introduces Roger as a scholar in his late 20s. The older Roger then becomes acquainted with Claire… and her fetching, 20-something daughter, Brianna.

Though she’s been raised in America as Frank’s daughter, Brianna is clearly the offspring of Jamie Alexander Malcolm Mackenzie Fraser: She’s described in the novels as a stubborn, passionate, slightly Amazonian and whip-smart redhead.

Bree and Roger’s interaction plays a large part in Dragonfly in Amber, not to mention the novels that follow it. Translation: Nailing the casting is crucial.

Outlander may follow form and place relative newcomers in the parts, like it did with leads Caitriona Balfe and Sam Heughan. But just in case the series is thinking about going with known actors this time around, we humbly offer up this short list of possible additions to the cast.

Click through the gallery below to see who we’d cast as Brianna and Roger — you’ll recognize faces from Beauty and the Beast, Friday Night Lights, Game of Thrones and Pretty Little Liars, among others — then hit the comments with whom you’d like to see play the pair.