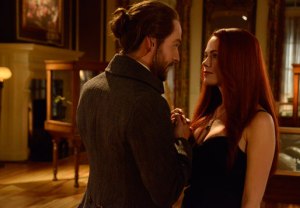 Moloch may be a thing of the past, but the residents of Sleepy Hollow will be faced with plenty of new danger — and drama! — when fresh episodes resume in 2015.

Fox has released photos from the first two episodes of the new year — airing Jan. 5 and 12, respectively — which find Ichabod and Abbie teaming up against new demons, including one called “Farmer’s Market.” (No, wait, that’s just a delightful photo of Ichabod looking characteristically overwhelmed at an actual farmer’s market. False alarm!)

There’s even a shot of Ichabod and Katrina on a date, showing a conscious effort on both of their parts to keep their marriage alive.

“Not only is [Katrina] having to adjust to life outside of Purgatory, but life in 2015 instead of 1781,” showrunner Mark Goffman tells TVLine. “And life with Crane, who now knows she’s a witch and a spy and all the secrets she had kept from him. Their relationship is in such a different place. … They need to figure out whether they work as a couple, and if they do, how? On what level?”

The new photos also offer a first look at Michelle Trachtenberg as Abigail Adams, a casting TVLine broke back in October.

Browse the new Sleepy Hollow photos below, then drop a comment: What do you hope to see when the show returns in January?