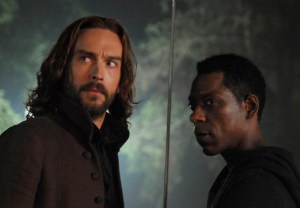 Stick a sword in Moloch, because he’s done.

Sleepy Hollow‘s midseason finale ended with a game-changing cliffhanger: Though Henry (AKA the Horseman of War) looked like he was going to skewer Ichabod with the Sword of Methuselah, he instead plunged it into Moloch’s chest, destroying the demon and effectively ending his fledgling reign on Earth.

The big twist came at the end of a packed episode that also saw Frank Irving agree to wield the sword — his signed-away soul couldn’t be ruined by the weapon, the Witnesses theorized — only to die during a battle with Moloch’s minions.

But is Irving truly dead? What does the Horseman Formerly Known as Jeremy plan to do now that he’s literally killed his idol? And how will Mr. and Mrs. Crane — whose marriage rests on very rocky ground — handle this new development?

TVLine chatted with stars Tom Mison and John Noble and, in a separate interview, showrunner Mark Goffman to find out.

TVLINE | Moloch is no longer! Can you tell us about the decision to end that character and to have Henry do it?
GOFFMAN | From the pilot, Moloch has been this mysterious big bad, and incredibly frightening and terrifying — a creature we’ve often kept in the shadows. We set up very early in Season 1 his goal: Moloch shall rise. He wants to come to Earth and begin his earthly reign. That’s really the next step of the apocalypse… Everything this season has been gearing toward his rise. But this time, [as opposed to in the Season 2 premiere], we felt like he should accomplish it. To make an unexpected twist on that, he should die. Then the question was how. 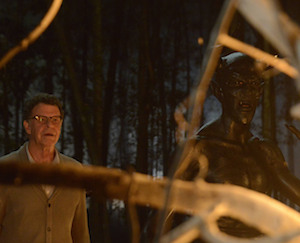 We started seeding, over the course of the season, the slow disenfranchisement that Henry was having with Moloch. He’s looked toward this creature as his true father, as the one who saved him… What was so interesting to me was what Henry wants, and what he’s always wanted, is this unconditional love from a parent… He’s still looking for that love, whether he knows it or not.

There’s that moment in the midseason finale when he says to Moloch, “I’m vulnerable now, how can I face the Witnesses?” And Moloch basically says, “Well, if you die, you die. That’s your job.” That also to me was how I got the idea for the title, “The Akeda,” coming from this story that everyone knows from the Bible of the binding of Isaac, where God asks Abraham to sacrifice his son… [Everything] leads to this climactic moment where Crane is unable to sacrifice his son. He’s unable to do it. And Henry has just come from this moment where he knows full well that the creature he believes is his father or has been treating as his father, has placed his love and affection toward, actually doesn’t give him that love and affection. But his archenemy, Crane, does. That pivotal moment leads him to make that decision and of course, because he’s Henry, he has to do that very cleverly.

TVLINE | Did you know the twist was coming for a while?
NOBLE | Not at all, until the script broke.
MISON | It was only a couple of weeks before we got the script.
NOBLE | It was quite late.
MISON | Because it’s an event that changes everything. Not only changing the characters involved, but it’s our main baddie who suddenly is dethroned. It’s bold.
NOBLE | The raison d’etre of the first half of the season is destroyed. So what are you left with, then, without any driving force, good or bad? So what needs to be created now is a new raison d’etre, a new reason for going on with the story for all of the characters. Otherwise, we’d just go over the same ground again. And that’s a challenge.

TVLINE | Who’s in charge of Purgatory now?
GOFFMAN | Yes! Great question. One of the exciting things for us in storytelling is, what happens to Purgatory when its leader is killed? It’s kind of like in an awful dictatorship, when the leader of a country is killed and the country is thrown into chaos. There’s fighting and factions, and demons can be popping up from all over. There’s the devil you know, and that devil had a certain kind of order and a certain kind of plan in place, and all that is throw into chaos now.

TVLINE | We see very brief reactions from those watching Henry kill Moloch. Can you give me a hint about how Ichabod and Abbie will take this turn of events?
Well, I think they were surprised. [Laughs] Relieved they’re not dead, certainly. That’s what exciting about when we jump back in in January. There are so many ways this could play out. Did Henry do it to save Katrina? Did he do it as a power play? Is he now going to be the new ruler of Purgatory? Does he not give a s—t about any of it? Is he planning to go on a walkabout? There’s a lot of potential ways that all seem reasonable, to me, that this could all play out. Abbie and Crane are going to have to adjust pretty quickly.

TVLINE | Earlier in the episode, we saw the Cranes’ marriage is in a rough place. How does Henry killing Moloch affect them? Does it change anything between them? 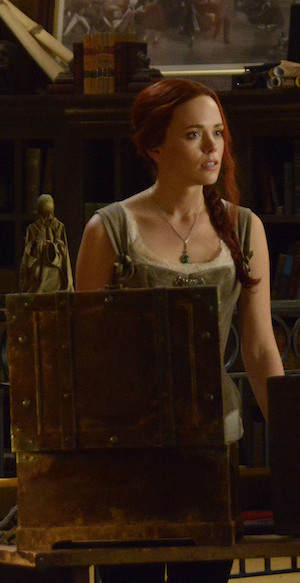 One of the things I think we’ve looked at over the course of the season is what a really difficult position Katrina’s been in. She’s been in Purgatory, which is the equivalent of a level of hell, for over 200 years. We saw how much that weighed on Abbie, basically being there for just a day. So that’s got to take a toll.

…Not only is she having to adjust to life outside of Purgatory, but life in 2015 instead of 1781. And life with Crane who now knows she’s a witch and a spy and all the secrets she had kept from him. Their relationship is in such a different place… They need to figure out whether they work as a couple, and if they do, how? On what level? That came to a head in the midseason finale and now they need to figure out: Is there any reconciliation, or do they move on? I think that’s really interesting territory.
NOBLE | I think [Ichabod and Katrina] would be impressed with what he did, but the previous five minutes weren’t so impressive. [Laughs] He’s a very naughty boy.
MISON | Like John said, when the character’s motivation — it’s driven us since the pilot, it’s the reason Ichabod was brought out of the ground — suddenly it’s done. And then it’s very clever, particularly the episode following: What do we do now when you think it’s all over, then how do you find new ground? Suddenly you’re 250 years out of time with no purpose. That’s been fun to play around with.

TVLINE | Let’s talk about Irving: Given that we know that Henry has his soul on lockdown, is Frank gone gone?
GOFFMAN | Hmm. There is an answer to that question. I’ll say this: One of the things I love about working on Sleepy Hollow is that “dead” doesn’t necessarily mean “gone.” On other shows, if you kill a character, it’s pretty hard to make them return. Irving’s death in the midseason finale needs to have weight, needs to be real and had a very strong impact on Abbie, Crane and Jenny. And that has to have ramifications in the second half of the season. But I think it’s interesting to see what happens when people come back, like Brooks for example.

TVLINE | Is Abraham’s humanity salvageable? Will we see that play out?
GOFFMAN | This season is really about family, redemption and duty versus family. It’s interesting that a lot of our characters and Katrina, at various points — especially given her relationship with Abraham — is always looking for redemption in people and looking to find what’s good or what could still be good, even in the most horrific of monsters. And so that’s still to be determined. But I think we’ll get an answer to that by the end of the season.