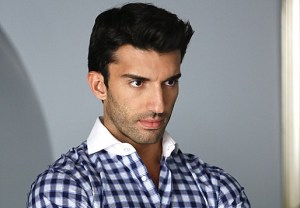 The following contains spoilers for Monday night’s episode of Jane the Virgin.

And down she goes.

On Monday night’s fall finale of Jane the Virgin, someone very close to the titular heroine took a tumble that will have major emotional and physical repercussions, executive producer Jennie Urman tells TVLine.

Also troubling: Rafael may be connected to drug lord Sin Rostro! But would the CW series really dare to tarnish one of its romantic leads?

Below, Urman weighs in on that question — her answer is not entirely comforting — as well as the threat that awaits Petra.

TVLINE | How is Alba faring after her fall?
We pick up right after the [midseason finale]. It was a serious fall, and she’s in the hospital. There’s definitely real emotional and physical jeopardy there.

TVLINE | How are Jane and Xo dealing with that?
It’s so horrible. No one knows that it was on purpose, so they’re going to assume it was a fall because no one was around. We have a hurricane coming in, and there’s an emotional hurricane within the Villanueva house. Just the thought of Alba not being there brings up a lot for both Jane and Xo, especially in terms of what kind of daughter she is and has been. Seeing her mom unconscious is really an awful thing and takes some time to resolve.

TVLINE | But will she remember what she saw and heard in the hotel room?
She does not. She does not as of now.

TVLINE | Is that because of a brain injury? Or because she was just so drunk?
The head injury. [Laughs] She has a serious head injury. She was tipsy. She was drunk. You often don’t remember a little bit before and right after an accident when you have a serious enough [injury].

TVLINE | With everything that’s going on in Jane’s life with Alba, is this a situation where Rafael can stand up and prove that he’s really there for her?
Our next episode is our hurricane episode, so there’s a lot going on. Surprising, right, on our show there’s a lot going on? [Laughs] He’s totally there for her, but it’s also hard to get to her at a particular moment. It’s a really emotional episode for both Jane and her mother. Rafael is dealing with that, but he’s also dealing with the problems that are happening at the hotel because of the hurricane that’s coming.

TVLINE | When can we expect answers about what Rafael is hiding?
You’ll know who Sin Rostro is [in Episode 12]. It’s all connected. I would say that the thing you won’t know at this point is whether Michael is spiraling out of jealousy or because he’s onto something with Rafael. That’s a big question.

TVLINE | You wouldn’t destroy your love triangle by making Rafael a bad guy, would you?
You’ll just have to wait and see. We don’t aim to destroy. We aim to complicate. 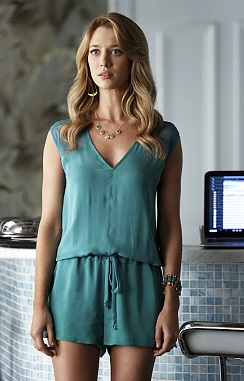 TVLINE | We now know Petra’s backstory, but the threat of Milos is still out there. So what can we expect on that front?
She’s keeping Ivan hostage and she’s trying to get that money so she can send him off. It all comes to a head in the hurricane [episode].

TVLINE | Will Milos ever make his presence known in Miami?
Oh, for sure!

TVLINE | What’s coming up for Michael? Is he going to continue to pursue this, not relationship, but hookup with Nadine?
Yeah, Michael and Nadine, it’s a hookup. It means different things to each one of them. It comes to a little bit of a head in [Episode] 110. Michael is in love with Jane, and he believes that they belong together. At the end of the day, he thinks, “She’s with this guy now because of this crazy thing. She got pregnant with his baby accidentally.” I think at the end of the day, he believes she’s going to wake up and come back to him.

TVLINE | One question I’ve seen come up in our comments section is, how strict is Jane’s whole “no sex” policy?
Not that it’s not going to stressed or challenged at times, but she has made a vow to herself not to have sex until she’s married, and it’s a vow that she plans to keep.

TVLINE | You’ve said on the show before that she’s a virgin, not a prude or a saint. Does that mean she has some experience in that department?
Exactly. If I had written it now, it would be, “She’s a virgin. She’s not a Duggar.” [Laughs] She’s a sexual person. She’s just not having sex.

TVLINE | Finally, Jane gave her blessing to her mother, so is Xo going to go after Rogelio?
She is, but that’s also going to be complicated. She’s been given the go-ahead, and we start to move them towards each other, but of course, obstacles continue to come up. These are two hotheaded, passionate people, so you can imagine it’s not going to be the smoothest sailing ride. But you definitely feel that they have strong feelings for each other.