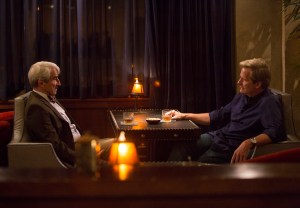 Warning: The following contains spoilers from Sunday’s series finale of The Newsroom.

Will McAvoy’s quixotic mission to civilize comes to an end in the series finale of The Newsroom, so it’s only fitting for the series to look back on how much progress the News Night anchor has made — as a journalist and a human being — in the four years since we first met him.

Verdict: Goodness gracious, what a complete ass he was when this whole thing started, eh?

The flashback-heavy episode, framed by Charlie’s funeral, illuminates the path that led Mac to accept the News Night executive producer gig and — in true Aaron Sorkin fashion — ties up every loose end for every major character, then dumps a suffocating layer of schmaltz over the entire affair.

Some parts (like Don and Sloan’s passing of blame about who pushed Charlie over the edge) were laugh-out-loud funny. Others (like that garage hootenanny) were ridiculous. Read on as I review how it all wraps up — and make sure to grade the episode and the season at the bottom of the post!

WILL MCAVOY LASSOS STORK! | We open with Charlie’s funeral, with everyone except Mac singing and looking somber. She’s outside on the phone with her doctor, learning that she’s pregnant — a fact she immediately shares with Will upon returning to the service. The news makes Will remember back to 2010, when he was a boorish jerk who didn’t even know Maggie’s name. In the flashback, Charlie and Will go out for drinks; the older man chastises Will for making his show, though highly rated, a huge snoozefest. Then, he tells Will he should think about having kids someday: “Being a father: It lives up to the hype.” The grin on McAvoy’s face when we cut back to the service is sweet, especially among all the sorrow. 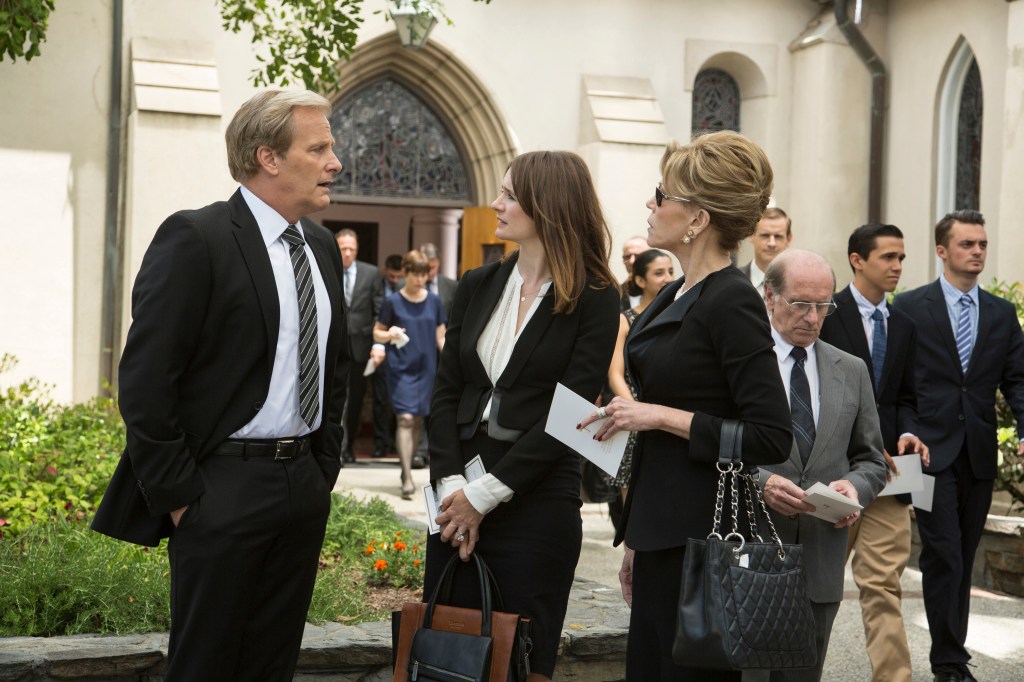 IN WHICH MAC’S FUTURE IS DECIDED FOR HER | After the service ends, Mac barely has time to tell Will she’s seven weeks along before Leona pulls her into Lucas Pruit’s limo for the ride to the cemetery. While Mac looks on in confusion as to why she’s there, Leona outlines Pruit’s latest public image crisis: In the past few days, there have been articles on income disparity between men and women at one of his other companies (a soft drink brand called Kwench, to which Leona dry notes, “You know that’s not how you spell that word.” Ha!) and on how he hired hookers (though he calls them “models”) to appear at his 35th birthday party.

The ride goes like this: Pruit says something douchey, Leona says something zingy, Mac looks on like a cocker spaniel whose tennis ball just rolled under the couch. Repeat a few times. Meanwhile, other flashbacks show us Charlie recruiting a depressed Mac while she’s doing some serious mid-day bowling and drinking. She’s been stabbed while in a war zone, she’s got a job lined up as the EP of a Chew-like daytime talk show, and she’s in serious need of a shower but Charlie thinks she and Will will spur each other to greatness, despite the fact that McAvoy seems to hate her to her very core. After Will’s explosion at the college speaking gig, Mac’s on board — and she recruits Jim to come to ACN with her.

THE DAWN OF SLOAN-DON | Meanwhile, Don and Sloan spend the ride to the boneyard relating Charlie’s last moments to Will. Sloan looks really remorseful as she recounts her takedown of the ACNgage guy, but then adds, “”But there’s another part of the story that Don’s going to tell you about that strongly suggests it was him and not me that precipitated the death of our very close friend and leader. Do you want to hear Don tell you that part of the story?” Heh. Time for more flashbacks! Short version: Sloan and Don met in 2010, but they didn’t care much for each other. She eventually like-liked him, but didn’t pursue anything because she saw him kissing Maggie.

And Mags? In the present day, she’s offered an opportunity to interview for a field-producer spot in the network’s Washington, D.C. bureau. Jim’s on board; he’s actually the one who recommended her for the position. But does he want her to go because he believes in her or because he’s trying to put space between them, three mere days after their hook-up on the flight to Havana? More on that in a minute.

PRUIT LEANS IN | The gathering after Charlie’s burial provides Leona more opportunity to school Pruit on how to be a badass CEO (AKA how to get the public to forget that you are a vile individual). She tells him to hire a news director who’ll fight with him every day; that way, he’ll ensure that he’s got a quality news operation instead of the dreck he hypes up 24/7. Mac still doesn’t get what’s going down, but don’t worry, mama: Your husband’s about to make the situation clear to everyone in attendance.

“The new president of ACN is MacKenzie McHale,” he broadcasts, and — wait a minute. Did I miss the part where ANYONE INVOLVED IN THIS DECISION ASKED MAC IF SHE EVEN WANTED THE JOB? Oy, Sorkin.

But wait, that’s not even the most absurd thing that takes place at the event! Will finds Charlie’s teenage grandson, who was mentioned during one of the flashbacks as being a musical savant. The kid is upset and noodling around in his tricked-out garage rehearsal space, so Will picks up a guitar and starts playing “That’s How I Got to Memphis,” with the boy — and oh look, Jim’s here on backup guitar and harmony! Then Gary CooperNotThatOne arrives to play percussion alongside Charlie’s younger grandson, who’s nodding his head like it’s all happening, man, annnnnnd I’m out. Too much, Sorkin. Too much. (If you liked this scene, hit the comments and tell me why I’m wrong.)

ALL’S WELL THAT… | So with Mac’s pregnancy basically out in the open, thanks to an un-slick Will, and her in Charlie’s old post, Mac promotes Jim to EP of News Night. (She’d wanted Don, but he wants to stay with the 10 pm hour.) “I won’t let you down,” Harper promises his boss, who replies, “You never have.” (Clearly she’s forgotten about the whole Mitt Romney interview debacle.)

Jim nearly trips over himself running out to the newsroom to offer the News Night senior producer gig to Maggie… who turns it down, because “I want to be a field producer. It’s D.C. I want to be in line for the White House.” They dance around what this all means, both finally admitting that their new thing is much more than a hook-up. Mags asks Jim about the success rate of his previous long-distance relationships, and he says they all failed. “Why is this different?” she wonders. “I wasn’t in love with them,” he says. To reiterate a point I made last episode: Maggie and Jim’s story is sweet… but too little, too late on this one, Newsroom.

Who else needs resolution. Ah, Neal. He’s back in the ACN newsroom, shutting down the ACNgage guy Sloan ate for lunch in the last episode and telling his team they’re going to completely rebuild the network’s site.

And Sloan and Don? Well, they’re Sloan and Don. They’ll be fine. He even gives her the bow tie Charlie’s wife gave Don. I bring them up mainly to praise, one last time Olivia Munn’s brilliance as Sloan Sabbith. She was great before the series paired her with Thomas Sadoski’s Don; after, they were electric together. Sloan, I’ll miss you the most.

Now it’s your turn. What did you think of the finale? How about the season on the whole? Grade both via the polls below, then hit the comments to elaborate!