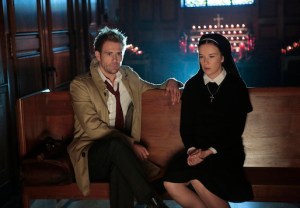 It’s a good thing Constantine‘s Newcastle mates keep needing his help: Otherwise, we might never find out exactly what happened during the oft-referred-to yet-still-unclear worst night of his life.

Anne Marie, yet another member of John’s old magic gang, surfaces in this week’s episode (NBC, Friday at 10/9c). You remember how Gary Lester turned to heroin after the nightmare of being involved in Astra’s botched exorcism? We find out that Anne Marie has chosen an equally drastic, yet completely different, coping mechanism: She’s become a nun.

Fans of the Hellblazer comics know that, prior to the terrible incident, Ann Marie was a shy psychic who had a crush on John. In Friday’s episode, she beckons him to Mexico City when the Rising Darkness makes itself known.

“We get another side of John’s relationship through that,” star Matt Ryan says during a press trip to the series’ Atlanta set. The story continues into the subsequent installment, and both halves of the two-parter are “my favorite episodes so far, because they’ve got the right balance of being really dark and humorous at the same time.”

Chalk this up to the humor side, we think: When asked about whether Zed — who’s rather flirty with the trench-coated master of the dark arts — and Anne Marie share any scenes in the episodes, Angélica Celaya chooses her words very carefully. “She gets to meet and interact with Ann Marie,” the actress says slowly, laughing. “Can’t say more than that!” (Intriguing, no?) — With reporting by Andy Swift

Constantine fans, are you looking forward to Sister Ann Marie’s debut? Drop a note in the comments!