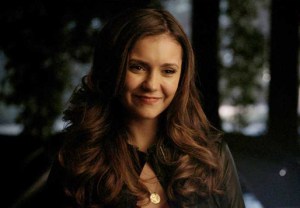 Christmas came early for Kai, who was finally granted a face-to-face with his literal other half. And just as you’d expect from a reunion party planned by the “sociopathic Ryan Reynolds,” there were lots of fun party games, including Melt Liv’s Brain and Pin the Knife Into Jo’s Arm. It eventually became too much for Jo to handle, so Alaric’s girlfriend — yes, they DTR’d this week — was forced to reclaim her magic.

And while Damon and Alaric were able to restrain Kai for a hot minute, the skinny-jeaned monster figured out a way to suck up all the magic from the Travelers’ spell. Even worse, he put a cloaking spell on Elena, so when she tried to go over to Damon’s house and reveal that she still has feelings for him — my assumption, of course, based on their flirty phone talk — Damon couldn’t even see her!

Kai’s entering some dangerous territory. You’d think a guy who just joined Twitter would know that nothing good can come from messing with #Delena! 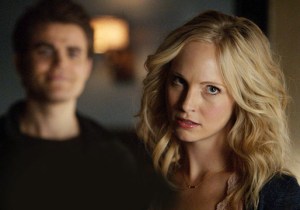 HOLIDAY HEARTBREAK | As per usual, Stefan and Caroline began the hour at odds (“Why are you here?” she asked him… multiple times), but the mood quickly shifted when Sheriff Forbes was admitted to the hospital. It turns out she never told Caroline about her glioblastoma, which the doctors believe has now spread to her brain stem. The news was obviously devastating for Caroline to hear, sending her straight into Stefan’s arms for comfort. This wasn’t a romantic moment for Steroline, but she’s letting him be there for her as a friend, which is exactly what she needs right now.

TURNING TABLES | Matt and Jeremy spent the hour dealing with Enzo, though Jeremy’s beginning to worry that Matt’s letting his anger get the better of him. “It’ll get you killed,” Jeremy said, which is never something I want someone to ever say to Matt. Ever. Naturally, Jeremy’s little premonition started coming true when Enzo got the upper hand during and threw Matt in the back of his own van. Enzo claimed he’s going to use Matt to destroy Stefan’s happiness, but Stefan’s so not the person I’m worried about right now. #PrayersForMatt 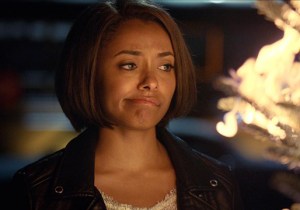 LET IT BURN | Meanwhile, back 1994, Bonnie had herself a crappy little Christmas, complete with a Charlie Brown-esque scene in which she dragged a lonely tree across an abandoned parking lot. It was beyond sad, but not as much as the follow-up scene, in which she and Jeremy pined for each other from a distance — an 18-year distance, to be more specific. That said, watching Bonnie walk away from the burning Christmas tree got me all kinds of excited for the “badass” she’s about to become.

DELENA’S DETOUR | On the #Delena front, the exes “spent the night” going over Alaric’s books to find anything they could about the Ascendant, and when Elena relayed the evening’s events to Caroline, she insisted it was purely platonic. But by the end of the hour, especially after watching the Forbes family fall to pieces, she had a change of heart. Unfortunately, as I mentioned earlier, Damon and Elena’s long-awaited romantic reunion will have to wait. (Damn you, Kai!)

TVD-ers, let’s get your thoughts on the midseason finale: Are you crushed over the news about Sheriff Forbes? Annoyed we didn’t get the Damon-Elena dinner? And on a scale of one to 10, how worried are you about Matt? Grade the episode below, then drop a comment with your full review.